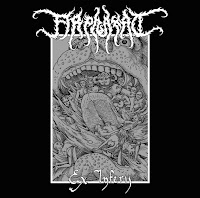 Just under 18 minutes of primal, incendiary filth, Ex Inferis was originally released as a demo by the French black metal duo Arphaxat back in 2003, but has now been revived as a 12" vinyl through the same label (Hell's Headbangers) which put out their sole full-length Loudun la maudite in 2008. What makes them somewhat unique is that they used a bass guitar/drum combo slathered with caustic black metal rasps, rather than the traditional roster setup with rhythm and lead guitars. Not entirely unheard of from Europe in those days, what with Necromantia having had exemplified that technique, but this stuff is far cruder, lacking the slow plod, occult atmosphere and use of synthesizers which was crucial to the Greeks' sound.

No, this is about as wretched as you can get for a demo recording with just those two instruments, raw and hostile vocals and absolutely no fucks given. Definitely some parallels to Von, Beherit or the earlier, less pomp-filled Barathrum records, the four tracks here just repeatedly beat you in the fucking eardrums with simplistic low-end note patterns dowsed in so much distorted bass buzz that it sounds like a cacophony angry insects being conducted into taut, bludgeoning swarms. The riffs sort of roil along without much by way of interesting patterns, but that's because the intent here was just to throw off the shackles of anything resembling melody, intricacy or innovation and just being as belligerent and anti-life as fuck. Drums are as obnoxious and splashy as you can imagine without losing the ability to support the guitars, and the vocals are a scathing but otherwise featureless bark which exhibits almost no variation in pitch or lyrical-line development, it's very level in its delivery and again, just no concern at all for diversifying its arsenal.

Sadly, I'm probably making it sound cooler than it really is, because other than a pure flossing of all the gray matter between my ears with its barbed-wire battering production, I don't know that the bass lines really come across as evil sounding, which might have been accomplished with just a few shifts in the note patterns. It's ominousness relies almost entirely on its raw recording, and so a sense of ennui kicks in once it's clear that no surprises or interesting riffs are ever going to occur. Granted, you can definitely develop a hostile, hypnotic reaction to this which doesn't make it completely unpleasant, especially in the bowels of the last track "The Pact", but the whole experience feels just a little too monotonous, and I even feel like the full-length, which took no strides in composition or style beyond this, just sounded a little better, where this is more of an intentional clamor. If you're really into the rawest of war metal, the ugliest of black metal's muddy originators, then this might harbor some curiosity or collectibility for you, but I found it only functioned all too well as intended, as hideous, repetitious, nihilistic noise.