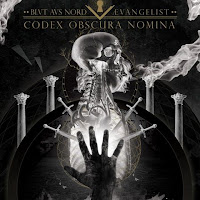 One of the more esoteric split pairings I've seen lately, there was no way I wasn't checking this out, and much to my satisfaction, it's just as strange and effective a team-up as I might have expected. French veterans Blut Aus Nord are known for a wide body of offerings that range from more traditionally or folk-flavored black metal full-lengths to peripheral release cycles that flirted with industrial-tinged escapism to a fault. Ævangelist is the project which steered prolific US musician Matron Thorn away from the raw black metal musings of his mainstay Benighted in Sodom to a new depth of ugly, atmospheric, compelling death metal which has proven to be among the most unique and alien in an ever-crowding field of cavern core morbidity. How would the two of these groups sound in proximity?

Well, that's not exactly the nature of this release, and I feel both bands distinguish themselves pretty clearly to their own back catalogues rather than rely too much on sounding flush with the other. There is certainly some overlap due to the outsider dissonance practiced by both, but it's almost like a line drawn in the sand where the four BAN tracks end and Ævangelist's 21+ minute opus begins. As for the former, do not expect Memoria Vetusta IV material here, their offerings are more in line with the 777 trilogy, only cast in an even darker pallor redolent of their mid-oughts fare (MoRT, Odinist, etc). An emphasis more on raw industrial or trip hop beats drowned in resonant, gut-wrenching distortion, discordant and unusual effects and guitars, foul whispers and growls, and a general clamor that is in its own way just as oblique and disgusting as any of the harsher recordings they've put out over the considerable backlog. It's almost like a bastard spawn of DJ Shadow and Godflesh, only far more cacophonous and unusual than that union could allude to. Or if the producers of the Silent Hill video game series passed on Akira Yamaoka's eerie proclivities for such beat-driven fare and then greenlit Vindsval and company to 'make it their own' after hearing Sect(s) or The Desanctification. Partly hypnotic, always repulsive.

"Threshold of the Miraculous", Ævangelist's contribution, is rawer still, and spans a much broader gulf of styles within its boundaries than even the four BAN cuts combined. Lots of tinny electronic impulses here, sudden shifts in tempo and instrumentation where the grimy dissonant guitars erupt, and clearer growled vocals than on the band before them. It's par for the course that the band is so disheveled and nightmarish in scope, but I couldn't help feel here that the length of the track was working against it. There were several impressive atmospheric parts, with the French narration and so forth, but a lot of the heavier sequences just sort of randomly appeared and disappeared and it did not gel together as a compelling whole, whereas I've really enjoyed the lest swollen material they've put out on albums like De Masicatione Mortuorum in Tumulis. I was more partial towards the Blus Aus Nord stuff, but even that didn't quite grasp me consistently over its own 20 minute presentation, it was simply fascinating to hear them spew forth those big beats and then slather them in dementia.

All told, this was a pretty interesting listen that is worth hearing if you're deep into either (or both) of the acts involved, but not mandatory when they've got much stronger exclusive material. The two 'sides' of the split function in tandem, yet I didn't feel that they both stood out equally. However, I don't think there's any question that Blut Aus Nord and Ævangelist continue to take chances, and their work will ebb and flow to particular audiences based on what eras or phases of their eccentric histories they were most enthralled by. If you loved the 777 trilogy but desired it to go a little further out on a limb, it's probably worth checking this out, even though it's not quite so immersive and doesn't last the duration of spinning yourself straight through all those records in succession. Daniel Valencia's cover work here is also pretty neat.