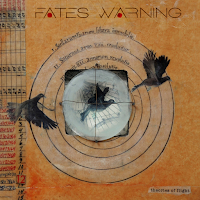 I suppose I'm a little beyond concern as to whether or not Fates Warning will ever be a truly 'great' band again. Their 80s power metal streak will always remain a monumental component of my collection, and their subsequent shift into pure progressive metal/rock territory on records from Perfect Symmetry to Inside Out will forever stand as a finer example of stylistic evolution that would help launch about a thousand other bands into similar waters throughout the ensuing decades. These days, if they can simply write coherent tunes and avoid the slump of quality and creativity they suffered from about 1995-2000, then I suppose I'm content, and like Fates Warning X or Darkness in a Different Light, Theories of Flight is a disc that will keep them afloat for several years to come, even if it's not helping them reach any new shores.

This record is expansive and modern enough to escape feeling lazy or like a post-midlife crisis, and it's borne on a mix of the band's more tranquil, feely moments with the jarring, jammy metal grooves that almost all trace their roots back to Rush's "YYZ" and other bastions of prog rock aggression that it's purveyors don't seem likely to evade for fear that they'll lose the narrative. Bobby Jarzombek's drumming is a pleasure to listen to, even if this is far from one of his more intricate or experimental performances, he really keeps the momentum going throughout harder hitters like the opening "From the Rooftops" or "Like Stars Our Eyes Have Seen", but still maintains that mechanical/electronic vibe that his predecessor Mark Zonder made a staple of the modern Fates Warning sound. Joey Vera is also a standout on this record, with fat and fluid bass lines that would be fun to follow along with just the drums even if you didn't have Matheos' airier melodies or grooves splattered all over it. The riffs themselves keep really busy across the constantly shifting tempos, and there are generally at least two things going on at a time to draw the ear, though when it comes to the sheer riff power these are just not as memorable as stuff Jim has written in the past. But I will grant him that he keeps the stuff somewhat exploratory and unpredictable as in "The Ghosts of Home".

Ray Alder's own contribution here is flawless, but I have to admit that there were times I zoned out and forgot it was him even singing, as if the years have mutated his vocal chords just enough to rob his timbre of some of the character I identified with it when I was younger. That said, a lot of the tunes seem very carefully fit to his voice, and there's no question that it's all plotted in such a consummately professional way that die-hard fans of prog metal from the last 20 years are not going to find anything to really complain about. The problem I have is just that real lack of memorable quality to the songs...even after numerous spins through the disc I just wanted to break out Perfect Symmetry or Parallels...there is no "Through Different Eyes" or "We Only Say Goodbye" to be found on Theories, even if there is more ambition, technicality and variation inherent in the material that they've assembled for this. I think it's a decent effort, an exhibition of proficiency and competence and loyalty to a fault. There is nothing here I could honestly say that Fates does 'wrong', but it just isn't one I'm going to reach for when I need a fix of Alder-fronted mood music, and I'd really like to have a modern Fates disc on the level of the excellent Arch/Matheos debut.