Suspiral - Delve into the Mysteries of Transcendence (2016) 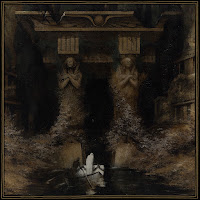 There are certainly a lot of appreciable 'parts' to Suspiral's debut full-length, but the sum does tend to suffer from overwrought compositions which occasionally feel like they just let the tape roll as they crash and crush through every idea in linear succession. The issue is that the songs here never really established themselves for me; they could have probably chopped and lifted a number of the more interesting and explosive riff progressions here into a half dozen less exhausting and more coherent tracks which didn't sound like a demonic lector rattling off tomes of blasphemies to an ever diminishing parish. No prevalent or hypnotic motif ever seems to manifest and cycle back through the errant procession of violence, and as it stands, the three tracks, ranging from around 11-15 minutes each, suffer severe bloat.

That's not to say the Spaniards are incompetent or bad by any stretch; they have quite a penchant for writing these writhing, raw rhythms which they douse in loads of unrestrained leads that seem to create the greatest atmospheric instances on the album (as you'll discover in the bowels of "The Art of Death"). The style exhibited is a fairly evenly distributed blackened/death, with the former coming through in a lot of the bursted tempos, redolent of Mayhem and Darkthrone, or a few of the simpler, slower riffing elements that come from that Celtic Frost/Darkthrone school of thought. The death metal portion of this is largely produced in the growled vocals, but also in a number of roiling rhythm guitars that straddle a primitive death/thrash fence, and the aforementioned wild leads which have that archaic, improvisational feeling of opening up a fretboard without little care or concern for the inevitable destination, as long as the journey itself sounds truly fucking sick. There are also some crunchier, dissonant death/doom sequences to even out the momentum, and a dark ambient passage bridging the first two tracks which was quite cool.

The drums are fairly loose and lethal, but capable of fulfilling any blistering speed necessary. Bass is evident, a quivering canvas of flesh beneath the rhythm guitar razors, but they seem to cut into it before it can discharge a memorable line. The vocals howl and growl appropriately with some windy sustain to them, and give Delve some of that claustrophobic caverncore presence without ever really embracing that niche. Definitely felt like a lot of ruthless, raw early 2nd wave black metal circulating through a death metal anatomy, and I think neither side of the balance wins out. On the other hand, a lot of transitions throughout these tracks feel half-formed, layering one pattern into the next without much of a thought to how they can interact and strengthen each other. As exhilarating as the record can become, not all the riffs are equally resonant and compelling, and there are a whole lot of them in succession, so too few times does something stick and even then it might just disappear. Grimy and insidious, for sure, and the cover art is excellent, but somehow I just couldn't connect with these tunes often enough.