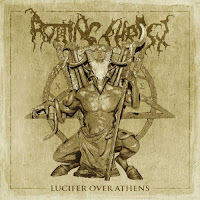 Lucifer over Athens is nothing if not substantial, the live album a format which Rotting Christ has hardly inundated us with through their decades of existence. Recorded on the band's 'home court' over two days of performances, one would suspect all advantages to be pressed with a rousing level of crowd participation and banter, but they really just get down to business, with a staggering 31 tracks and two discs that draw upon nearly every full-length the Greeks have released to the public. The omissions are few and not terribly noticeable or important, even to pundits for the group who have generally obsessed over the band, but might find a few of their studio works to seam together a little too much over the last 10-15 years. There is something here that will align to most of their audiences' tastes, even fans who had dropped off the wagon after their steep ascent in the 90s, a streak of material which in my own estimation they've simply not rivaled or exceeded in many attempts now.

Having seen the band Stateside a number of times, I can actually vouch for the band's live capacity as it appears on these discs. Even when their performance might have been marred by small, dingy port city club sound systems, they were enthusiastic and personable to a fault, excited for the opportunity, and did not lack an emotional presence even when certain instruments wouldn't translate as well to the stage. With Lucifer Over Athens, everything has been smoothed over, balanced. Earlier tunes like "King of a Stellar War" and "The Sign of Evil Existence", or others even older, sound flush with the newer, more percussive, rhythmic, and tribal material they'd been releasing up to this point. Though the disparities in style and structure, the contrasts actually strengthen the performance as it's splayed out across the two hours and 15 minutes of content. Leads and melodies are really clear, the drums are clean, the vocals as blunt and tortured and characteristic as Sakis appears on record, and with the synthesizers and choirs and other elements inherent to the music it gives off a grandiose, vaulting impression in the live environment with just the right level of occasional audience ambiance. Van's bass lines don't always rumble through the mix, but in sparser moments where the melodies are set to soar in, say, a "Demonon Vrosis", it's presence is ramped up considerably.

There are few if any Rotting Christ records I dislike to begin with, so I was predisposed not to take issue with much of the set selection, but even the couple cuts from Κατά τον δαίμονα εαυτού, which did not resonate with me, come across fairly fresh in the context of this performance, and it's the sort of live experience which made me want to pull out some of the studio albums again and listen through. There is still life left to the band, ideas that can be enmeshed to the unique, simpler broth of black and other metals, and Lucifer Over Athens reminds us of this fact. It might not go down as one of the most poignant and memorable live experiences on a collectors' shelf, and there's a notion in this generation of the increasing irrelevance of such products, but they remain a badge of honor for the older artists involved, and I'd say the Tolis brothers and Season of Mist can pat each others' backs on a job well done. The rest of us can muse over whether we'll another quarter century of Christ to collect into yet another such live package. I'll also add that it was nice to see them display the logo again, prominently; their most recent studio material, marred by some of the dullest artwork choices they've made in decades, has felt tainted for excluding that on the front.