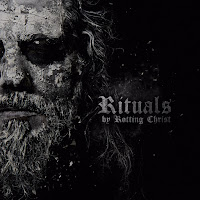 Rituals is on one hand a monument of Rotting Christ's trajectory towards a near-complete saturation of the mythic and mystical in their compositions. It might feel uncanny to label this as 'folk', but a lot of the charging, galloping charioteer rhythms so pervasive in their last 10-15 years of work are out in full force, to the extent that they, along with the multiple layers of chorus vocals shouted with maximum amplitude and testosterone, have become the primary component in the Greeks' music. It's not out of the question to consider what the band has become the aural, metallic equivalent to the Trojan War, only somewhat less long-winded and intricate in its details and designs. Lyrically, this is an album dealing with the dark occult, and that has little to no bearing on the particular imagery it conjured in my skull, but about 50% of the percussive, blitzing, tribal music here feels fit for a duel between Ajax, Paris, Achilles, and Hector in any combination you can dream up. 'Come, friend, you too must die. Why moan about it so?'

On the other hand, it's just another slight case of returns diminishing, a half or full rung down the ladder of quality which its Κατά τον δαίμονα εαυτού began to descend. Glorious, but empty. If I can say one thing that is truly in Rituals' favor, it is the production level. Massive, polished, precise, the low degree of intricacy and complexity here translates into a good fit for the bombastic volume of the somber and rasped vocals, the snares, kicks, overall momentum. Rituals 'sounds' so good that I am almost driven to grant clemency to the fact that there's just not that much here by way of those infectious, 'classic' Rotting Christ guitars that I've been smitten with for over 20 years. When and where they do appear, they instantly shine, like the gleam of a Hoplite's sword after a morning of carnage in the sun. But too much of the writing here focuses on a predictable slog of chords and syncopated rhythms that are meant more as an added layer of percussion than having any melodic capacity. It's as if the band is using two or three drummers, only they had one kit so made the others bang on other instruments, and everything serves as a vehicle for the vocal arrangements; which are acceptable, and bridge the band's obsession between extremity and antiquity, but not enough to inter this album deep within the memory fields.

It wouldn't be a stretch to compare Rituals to a record like Chaos A.D., another example in which a band simplified its approach in lieu of adopting native cultural aesthetics to some of its metal core, only that one really stuck with me (and I know it did not for a great many listeners). Rituals is instead about as exciting as its cover art, another example of the band shunning its great logo for something plain and uninspired, much like its predecessor. I understand this is all to 'let the music speak for itself', but apart from the cultural feel and immersive mix of this album, it didn't end up resonating with me or making much of any statement. A few good licks exist here or there, and in truth a lot of the tunes are well enough structured, but would have been better served with a few extra riffs that deviated into more memorable and unexpected patterns alongside the warlike veneer of the drums and vocals. Like the figure on the cover, it feels like there was initially some life or inspiration here which succumbed to the petrifying gaze of a gorgon. There's a surface pulse, but it could have gone so much further if it had felt fully alive, capable of bleeding. Not an awful effort at all, especially if you're in the business of sacking cities for a member of the fairer sex, but once again I found myself pining away for the elegance of A Dead Poem, Triarchy, or at least some of their more eager experimentation in the earlier 00s.