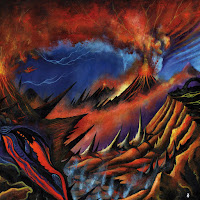 The way I see it, there are really two ways one could approach a conceptual album about the sprawling Pangaea. One could use the music to represent the seismic aspect, shifting and rifting of land masses in either the formation or dissolution of the supercontinent. Or perhaps one might be more privy to a fantastical interpretation, built upon mythic civilizations, prehistoric creatures and feats of derring do by primitive demigods, the glories attributed to heroes of distant legends that span millions of years. Either would entertain me, but Alp of Indiana's Ecferus sides pretty heavily on the more accurate historical and scientific details, not only of the physical place but the evolution of life and civilization. Akin to what the Canadian thrashers DBC once evoked with their sophomore album Universe, only applied on a more directly terrestrial scale, with more poignant and elegant lyrics, against a black metal background.

The most notable trait of this disc, however, is its rich and textured guitar playing across several levels, which actually conjures a balance of both aesthetics I mentioned earlier. The instability and frenzied component is delivered with the constant rhythmic transformation, between the more traditional tremolo picked passages, dissonant and neurotic chord progressions, and willingness to explore a substantial swath of moods and tempos. But there is that sense of lost majesty and glory too, that 'legendary' element, which is serviced by Alp's commitment to writing chord patterns and tremolo lines that don't constantly conform to a thousand you've heard before. There are always subtleties, ebbs and swells happening across all the tracks that keep the ears affixed, especially when you add over these his multi-tiered snarling and rasping toned which give the impression of some primordial corpse painted shamans watching the world take shape. Enough direct lineage here to the Scandinavian masters of the past, but he's just not copying their notes verbatim, so Pangaea has a sense of freshness to it which has held up through a number of repeated plays.

Melodies and leads are fragile, atmospheric and constantly elevating the riffing subtext, while the beats place an appropriate emphasis on thundering bass that might shake the walls of creation if you could loudspeaker the whole planet; but also cognizant of interesting grooves at points where the aggression cedes to a more jazzy, progressive post-black panorama. Alp is also not immune to the lure of further experimentation, with some dark and throbbing synthesizer driving "The Human Transition", a fascinating opener to what is by far my favorite tune on the album, "Reciprocity of Despair", an onslaught of excellent guitar lines and turbulent, tectonic structures which carries all the best hallmarks of melodic black metal and Morbid Angel-like Cyclopean rhythmic tumult in roughly equal measure. The metal tracks are substantial, ranging from about 8 minutes on up, but there are only four of them, so I never felt like I was becoming exhausted or having my patience beaten out of me. Pangaea is perhaps not universally consistent, and some might not appreciate the vignette pieces as much as the wealthier full-bore compositions, but for just one musicians this proved a formidable introduction, and I look and listen forward (or backwards) to more.