Ingested - The Architect of Extinction (2015) 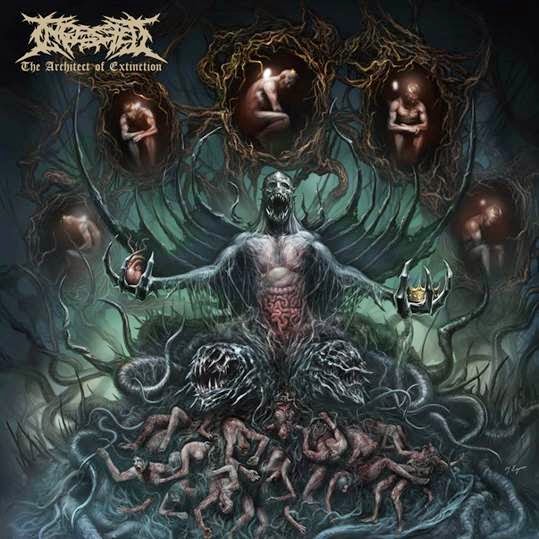 Right from the opening chugs of "The Divine Right of Kings", it becomes very clear that Ingested are in no danger of abandoning that meaty, precision slam pacing which made a treat of their 2009 debut Surpassing the Boundaries of Human Suffering. A few new tricks were learned along the way, in particular the frenetic breaks into blasting brutal 90s death metal terrain, which are implemented here effortlessly with a mechanistic forcefulness. But this album truly serves as the 'growth' which I might have expected six years ago, and ended up getting The Surreption instead; which, to be fair, also had some obvious stylistic similarities to this, but seemed a slight bit convoluted with the gang shouts and a consistent lack of the compelling riff progressions which had put the debut on my radar.

Well, The Architect of Extinction has plenty of them, whether the band is firing ahead into a burst of tremolo picked artillery or laying out the slower, but slightly more complex grooves than one would have found on the debut album. There's quite a lot happening on this record which we've all heard before, especially the palm mutes that dwell on the bottom 5-6 frets of the guitar, but what makes the material stand out to me is just that clean, punchy production of the rhythm tracks, and the fact that they do end up, despite themselves, stumbling onto a few interesting patterns which don't seem to strictly rely on rehashing the blueprints of the past, even when they do. I'm not often forgiving of bands that use the mosh/slam subcultural motivation in a lot of their writing, but this UK quintet just has some strange ability to make it feel fresh to me once more. By 2015 standards there is nothing even hinging on innovation or nuance, but had this dropped in like 1994-1996 people would have gone absolutely ballistic and they'd belong to some unspoken hall of brutal fame alongside obvious idols like Suffocation, Cannibal Corpse and Cryptopsy.

By no means am I intimating that The Architect of Extinction is going to sit well with the detractor of the modern brutal or tech or deathcore aesthetics. The chugged pit rhythms and tremolo pickings are so robotic that it feels like the humans playing them plugged into some shared thought stream, and the riffs rarely border on the 'classics' of the late 80s and 90s which inspired the generations of bands who kept it all alive. There is nothing 'old school' here by comparison to lot of the death metal that is trending, but clearly the band has done some of its homework in taking the care to balance out their material with just the right degree of variation. Tunes like "Endless Despondency" and "I, Despoiler" even weave in a little of the atmospheric, slower miasma which bands like Pestilence and Morbid Angel mastered in their heydays. The gutturals hover just about the toilet-bowl level, but feel efficaciously brutal and entertaining, especially when they hit a little sustain or reverb.

It is greatness? Nah, not quite yet, but I'd listen to this any day over most of the output from bands like Job for a Cowboy or Whitechapel who have left a larger footprint within the medium. I do feel like the leads could be explored more, they thrive where they do exist and aren't just frivilous fret runs, rather used to add a little more contrast and balance. That said, there's enough concussive conviction to The Architect that brutal death fans who don't shun a couple haircuts and a clean studio mix might get something out of it, and many who enjoyed Surpassing the Boundaries of Human Suffering should find this the proper evolution from that point, hinted at through the 2013 EP, but fully formed and hungry here.