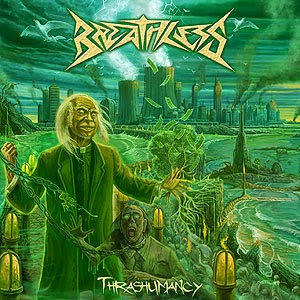 Another record that seeks to enamor itself to a particular audience before a single note is heard, Thrashumancy instantly claims our attention with its vivid artwork and inane portmanteau title...but perhaps not so inane if your past decade consisted of the lauding over pizza thrash, or 're-thrash' acts who fit their vintage hi-tops, tear their jeans and have moms who can sew a whole lotta patches. Because, let's face it, it isn't a real battle jacket if your mom doesn't help you sew it. Well, fortunate for us, Breathless play 'real' thrash metal, of the garden variety, of course, without much ambition behind it or nuance or that pesky concept of songs that the listener is going to remember afterwards, which to me is rather missing the point...we didn't love thrash metal in the 80s because of it's 'look' or it's 'style' alone, we listened to it because of the bloody songs that stick on the brain 30 years later...not just a lifestyle or a style of clothes we wore to party with a few beers.

To be fair, I'm sure Breathless 'means something' with a lot of the messages besides their songs, and I'm not ready to write it off as just some senseless party thrash entirely. But it just doesn't help that they all feel as if they were drawn from a lottery of their influences. On the musical side of things, they've write in a mold that straddles the border between mid-paced, West Coast American headbanging variety ala Exodus, Forbidden, and Vio-Lence, and the much closer to home German scene, in particular Destruction, whose clinical picking progressions from both the 80s and later Antichrist era seem to provide a major influence to more than half the cuts here, and generally the better individual riffs, because a lot of the slower neck-break parts seem really forgettable and they just don't possess that innate meanness of something off Pleasures of the Flesh or Reign in Blood or Eternal Nightmare, something timeless and violent and raw. Riff construction definitely falls in a space between the more serious, regimental thrash of the longhairs and then the crossover crowd of the 80s, I heard little nods to bands like Crumbsuckers in their prime but these Spaniards go more for the palm mutes than the open chord barrage of most bands in that early NY wave.

The vocals have character, burly and messy and prone to lean into outrageous snarls and sound pretty goofy somewhere between Ron Royce (Coroner), Schmier (Destruction) and Roger Martinez of Vengeance Rising, but I never felt like they were used to full effect, getting more hectic on the verses than the choruses, where they really might have been refined into a sticking point. Bass lines are good and thick, a good fit for the rhythm guitars, which I thought had a punchy but regrettable tone that might have worked better with a lot more edge to them. The drumming is fine but doesn't really catch my ear, especially without high quality riffs that keep me focused. A lot of the album is spent by the veteran thrasher playing 'guess where I've heard that before', and there overt nods, whether conscious or unconscious to anything from Xentrix to The Antichrist to Coroner's No More Color. Lead guitars seem few and far between, rather noncommittal where dissonant frenzies might have been better suited to the more surgical guitar phrases that represent the best on the disc, but even that I could forgive if the songs were good...

And that's simply not the case here. 'Shockingly average' would be a better descriptor. The album is by no means as lamentable as its title had me dreading, and I didn't feel like I had just had a couple of slices of extra cheese and pepperonis smeared across my cheeks, but it's another pretty picture among a sea of them that have been released over the last 5-10 years by bands trying to tap into that nostalgia. The Spaniards don't draw directly from any one source on the whole (just in certain parts), but that would not be a bad thing either if they were so damn good at it that they could properly resurrect nostalgia or even contend with their very inspirations. As it stands, just another walk in the nuclear theme park, potentially impressive to supplicants who were just getting into the music in the 21st century and have exposed themselves only a small amount of the niche, but for experienced thrashers this just isn't going to plug anywhere into the collection that isn't already occupied by some release that is light years ahead of this, and was so even decades back...