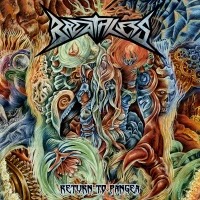 Notice anything different? Return to Pangea is an album which is far more likely to be taken seriously, void of any overt 'thrash-this' 'thrash-that' nonsense and potentially even teasing us with a genuinely interesting concept. Now, I doubt the sophomore album by Breathless could possibly be something as enthralling as a tale about Earth's landmasses being crushed together once more, but I'm very willing to be proven wrong, and for at least part of this album they're rattling their sabers about just such a apocalyptic scenario. More importantly, Return to Pangea is an improvement over its predecessor in nearly every discernible category, with a richer and more focused selection of riffs that channel some of that potent Teutonic influence circa Destruction into some genuine, melodic thrash which at times feels a lot like modern Artillery, albeit less wildly proficient and possessing distinctly different vocals.

The power of the guitars alone is enough to thrust this past the debut in terms of quality, where they had seemed a little too punchy and processed on Thrashumancy, they're really cleaned up here and there is a better mix of the rhythms and occasional lead flights. The structure of the riffs carries a slightly less surgical feel to it, and more of a bright, 'feel good' style with lots of bluesy little tails and fills in between the Stützer Brothers-like finesse. There is no shortage of variation here, the songs are each stuffed with a good number of progressions, and while they're not always so memorable, they at least rock consistently and the choices feel pretty sound. This is not going to live up to the technical European thrash masterpieces of the later 80s, not by any stretch, but the amount of effort these Spaniards have put into this is at least vastly superior to most of their pizza thrash peers who are more or less cloning the crossover and denim & leather thrash of years past without the level of charm and songwriting needed to pull it off...no, I'd put this more in a class with modern bands like After All and Vektor who really took the spirit of the old school and plugged it into contemporary recording standards which don't sound entirely too derivative to even bother about.

Props to the level of production they added to Eduardo Moreno's vocals, taking that blunt and ugly charisma he exhibited on the debut and then throwing in reverbs and echos here or there which highly his higher pitched screams, reminiscent of Schmier...maybe Schmier's deformed cousin who'd clout you over the head, stuff you in the trash can out back of the high school cafeteria and then go and spend your lunch money on dope. Something like this never happened to me, I promise. The drums and bass sound more flavorful and peppy because they've got something to actually celebrate here, a few riffing progressions that are worth a damn surrounded by others that are at least on the winning side of average. The leads aren't exactly substantial, but they're far better than they were on the first album and actually imbue a little fire and emotion into the tracks. It's not perfect, and there is plenty of room to grow yet, but Return to Pangea is basically exactly how you want to re-assess your band's trajectory and come out the better for it. The cover art may seem a little too death metal and chaotic for the music itself (reminded me of Danes Invocator), but really if you're into bands like Headhunter, Destruction, and Artillery in their 21st century forms, or Greek acts like Suicidal Angels and Angelus Apatrida, then this is worth your time.