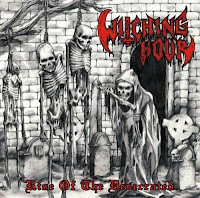 It's always good to hear so many bands in touch with their roots, especially when those roots include primal proto-type death/thrash bands like Possessed or the mighty Venom. Germany's Witching Hour is one such band, with a filthy old school approach that kindly ignores just about everything in the past 20 years. Rise of the Desecrated will plug you directly back into the 80s, with its garage/demo production and the twisted dirt of Jan Hirtz' vocals. The album has a few misses, but for most of its playlength its good opposite-of-clean fun.

Witching Hour excels when dishing out the speedier material. "Pedophiliac" and "Underworld Alliance". Frenetic and unflinching, with riffs that recall all the grit of that 80s time period, from Venom to The Accüsed. The band can break down into some meatier, slower riffs (as in "Underworld Alliance") with a wicked edge to their note selection. Other choice tracks include "Blood in the Alleys" with its proto-death metal opening riff, "Eternal War" which reminds me of Witchery, if that band were a lot more raw and playing in your basement, and "Cold Grave" which sounds like Venom and Whiplash jamming in a slaughterhouse. There are a few tracks like "Burn the Witch" which start off well but end up with some weaker riffing.

Rise of the Desecrated is obviously going to appeal most to those who crave those old sounds. This is not a technical band and nothing they produce is going to tickle your fancy for progressive or original material. The album is nothing I haven't heard before many times, but I admire the band's loyalty and love for its influences. If it isn't broken, don't fix it. Witching Hour has created a debut that, while par for the course, should stoke up those summer nights of bullet belts, leather and denim fury.