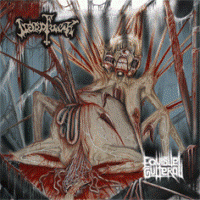 Exquisite Gutteral is the type of album I tend to hate...extremely boorish and simplistic US death metal/goregrind. You know the type. More thought was apparently put into the shocking song titles than the actual composition of the music, and there are probably 250,000 bands just like this in the US alone.

Here's the kicker...I actually had a fun time listening to Lord Fuck. It's dumb and simple, intentional, and lacking any memorable riffs or much replay value, but it sounds like it was pretty fun to make. I can almost hear the laughter of musicians in between each take. The old school vibe of the cover and logos is also quite nice. So if you're bored out of your skull and need something to listen to, and you have a sick sense of humor...why not? "Rotting Blood Served Over Mannocotti", "Infant Daycare Car Bombing", and "I Probably Fucked Your Mother Nine Months Before You Were Born" should hit the spot. The band also covers Deicide's "Once Upon the Cross". There are a few sluggish moments on the album, such as the crepitating midpoint of "Rotting Blood..." which can create an almost hypnotic brutality, whether this is intended or by accident is beyond my comprehension.

In short...expect nothing from Lord Fuck, because you will get nothing but a fun 30-ish minutes of banging your head very slowly into a wall while you lower your genitals into a meat grinder. Prepare for anaesthesia and amputation. Beyond that, I can't recommend it.