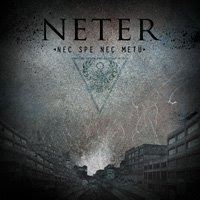 Spain's Neter create a bludgeoning form of death metal focused tightly on their central riffing. A distinct power-thrashing edge lends some vital energy and semi-technical guitar work into the flesh of their creations. Nec Spe Nec Metu is their debut full-length, after a pair of demos a few years back. While many death metal acts are thematically rooted in gore and violence, or occult mysticism, Neter take on a more social and philosophical slant to their guttural rantings, with a taste for symbolism.

After the interesting sample "Prelude", the band erupts into "Baptism of Fire", a relentless and savage onslaught of winding and grinding that breaks for some catchy grooves. "Event Horizon" starts decidely oldschool, almost like something you'd hear on Scream Bloody Gore. Quite pulverizing. "The Death of the Liturgy" creates a rumbling, mosh pit epic, but often sobering and never cheap. Some of the better tracks include the punishing "Minotaur" and the opening volley of moshthrash that is "Prometheus". "Assembly Line" also has a nice Slayer-esque wrath to it.

Nec Spe Nec Metu doesn't bowl you over with its production, it's simple and honest and sounds fine. The bass plods along below chunky guitars and the drums create a level battery. The leads always lend a nice flurry of mystique to the concrete of the rhythms. Manuel G. has a nihilistic flatness to his vocals which might turn off some, but you definitely get used to them. In all, Neter reminds me a lot of Vader: a very basic, honest yet brutal death metal outfit. What you see is what you get, and what you're getting is your ass kicked &#@(&@.