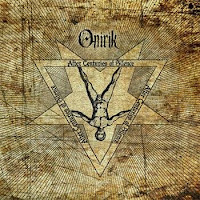 After Centuries of Silence is another of those albums which has taken me a spell to ponder. The third full-length from Portugal's one-man empire of sorrow Onirik (aka Gonius Rex), it is a crushing work of despair and romantic, raw black metal which is quite unlike anything else I've come across recently. It is unabashedly perfect in a way I'm not sure many will understand.

Don't be fooled by the basement/bedroom production of this album, its walls of titillating fuzz are 100% hypnotic. Each riff leeches love and emotion from the listener. That is can have such an effect with a droning drum machine, and Rex's cookie crumbling throat salivating across its tones, is nothing short of miraculous. "No Stars Will Shine" opens the sadness with a series of original and amazing riffs that created an instant attraction, romantic and hissing and fuzzy and more somber than a truckload of gothic and funeral doom kids at a Tim Burton film. What's more...this storm of savage emotion does not end on this album, ever. Close your eyes and let the "The Quest of the Dark Lord" crawl across the black & white landscape of your grim subconscious...a shadowed figure reaching up to extinguish the sun and drag the stars down into its essence. "Black Paintings in the Sky" creates the perfect, driving seaside hymn, like plague victims lain across the black stones of a rocky pier beneath an overcast sky. "Oh Chants Make Hear My Splendor" is faster, Rex has not forgotten that he is a fucking blackheart. I could write another paragraph for each remaining song on this album, I enjoy it that much.

After Centuries of Silence sounds like it was recorded on a four track in 1991. But it requires nothing more to convey the wealth of emotional impact. It's completely dead and evil, yet at the same time blissful and mesmerizing. Not a single note on this album removed me from its horrific embrace, and needless to say it belongs in the upper crust of black metal released this year, along with the latest offerings from Oranssi Pazuzu and Arckanum. Fucking staggering.