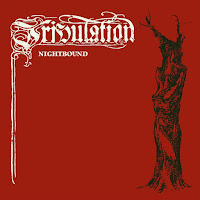 The Nightbound EP was another skimpy little fan EP that arrived with little fanFARE, available in two versions, of which the digital was the more substantial by one track. This is really just multiple versions of the same song, and while I like "Nightbound", and LOVE Tribulation, I don't really think there's enough of a deviation between the separate incarnations that it warranted any sort of additional product. Now, that's not to say that any of the three are BAD, but usually if you're going to release something 'extra' you throw the audience a bone or something, maybe include a cover, a rarity, something that makes them feel as if they've locked ears on something exclusive and interesting. In fact, this very band has done such before with singles. I'm going ot hazard a guess that this 7" and digital EP probably wasn't entirely the band's idea...

Now, all three of the "Nightbound" tunes included are fine...the studio track we already know off of Down Below, but the live recording certainly sounds pretty good in that context, with bright guitars, vocals and rhythm section all mixed quite well, and arguably this is the most energetic deliver of the track on the EP. Lastly, there's the instrumental demo, and while it's not a song that truly benefits from the lack of vocals, it's fine for mood music. I'm covering the digital edition myself, but if you go for the 7" I'm pretty sure it doesn't even include the studio version, so it's another reason you're just buying it for that minimal artwork and to have another 7" record sitting on your bloated shelves that might not ever even be listened to again...but hey, maybe will be worth something? Doesn't seem like the content to this is even historically worthwhile as a collectible. So the bottom line, I love the band, the song itself is cool, and I love their albums as I've written about numerous times, and the Nightbound EP is entirely skippable.