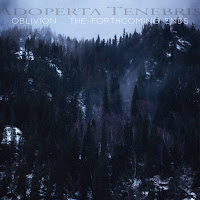 Adoperta Tenebris is a one-person black metal attack out of France which offers a steady contrast between slower, pensive riffing sequences and then a few of the rapid-fire passages that are a bit more what you'd expect. However, that alone might be selling it short, because 'G' does put quite a lot of effort into creating varied, slower, swaying rhythms threaded with interesting percussion and melodies, so I'd say that the real strength here often lies in the former category. That's not to write off the surging, blasting cycles, which are competently handled and even fire off a fairly well-built riff here or there, but I just feel like the material is a little more textured and compelling when its at its more plodding pace, and it varies between chugging, roiling chords, and often with faster riffs that are splayed out across its visage.

The atmosphere is created almost entirely through the rhythm guitars, so don't expect this to be dowsed with synths and such, the melancholy and plummeting majesty are all riff-based and desperate, as the vocals maintain a somewhat monotonous hybrid rasp/growl which doesn't differ it up beyond just the syllabic structures. The beats are busy enough, with some personality through the fills and in the aforementioned slower sections, and the bass is prominent enough to give a richness and potency to the guitars even if it never really winds off into a force of its own. There are few surprises ever in store, perhaps a case where the heaviness drops out for a sample/narration ("Utter Manifest") above which only more spacious guitars soar off, and while the 48 minute playtime does have enough variation to justify itself, I'd have to say that there were sadly not a lot of individual riffs or tracks which stood out to me as memorable.

And I do hate to  diminish the effort and proficiency of the artist here, because the performances and knowledge of genre are both on the level, but I'd almost describe Oblivion: The Forthcoming Ends as too consistently average, with too little that leaves an impression beyond the surface-level gloom and sadness that are automatically manifest through the niche in which this sits. The lyrics are actually quite thorough and perhaps more picturesque than the music itself, though they do fit the mood of the music extremely well; there just wasn't much here which stood out to me as something that warranted a lot of repeated listening. It's professional, sufficient, produced well, and not at all poorly conceived with its style of ebb and flow, but could use more breakout riffs and songwriting to burn itself into your mind.