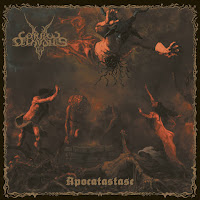 Corpus Diavolis has a sound which distinguishes it from both the more Medieval/historically-inflected black metal and avant-garde/dissonant spectrums of the French scene. Instead, they imbue their concepts with a more steady, ritualistic and I'd even hazard, theatrical leaning which offers a mesmeric experience to those willing to patiently sit through the experience; while the band does come up with some solid individual riffs and choral sections, this is one where the impact of the 45 minute whole is far more memorable and menacing than trying to break it into shorter listening bites. While the totality is largely cast in the black metal mold, there are also some riffing undercurrents more redolent of classic death metal which snake their way into the apocryphal atmosphere.

Production is clean and powerful, from the tremolo picked serpentine riffs so important, to the louder, broader doomy chord patterns that they'll often transcend into. The rhythm guitars are for me one of the two highlights, always layering in some atmospheric, open ringing notes or chords to the slower segments, and then picking up volatility and wicked attitude when the speed increases. The other strength is the vox, which are mixed between dependable rasps, growls and grimy narrative passages, and then these great, deep male choir bits which work wonderfully when the percussion gets a little more thunderous and tribal. A great example of their style is "The Dissolution of Eternal Extasy in the Embrace of Satan", which has so much on offer between its incendiary riff changes and creeping atmosphere throughout the bridge. The drumming is super steady, with nearly robotic double bass kick speed, but also loads of cool fills and a flair for the exotic/tribalist with a Celtic Frost To Mega Therion influence. In fact, while Apocatastate is obviously a lot more involved and technical than such a classic, Corpus Diavolis definitely put me in mind of how a band like that might have sounded if it started in the current time, that sort of cloying, occult atmosphere just saturates this experience and its pretty formidable.

There were a few moments when the engagement dipped a bit for me and felt more like background noise, but I attribute this more to the attention span I was feeling in that moment, and not any dearth in quality of delivery, because ultimately this is yet another strong act in what might be the strongest black metal scene in the world, with both its more conventional and experimental acts delivering non-stop for the last two decades. Apocatastase has the production, the musicianship, the sinister unease to hold its value for years to come, even if it's not something you'd file as an instant masterpiece. The packaging for the CD is also great with its gold print against black, Satanic artwork, interesting lyrical lore, and overall this is an easy one to recommend whether you're into the band's French peers or the orthodox black metal stuff out of Sweden (Ofermod, Ondskapt, Funeral Mist, Mephorash, etc).

Posted by autothrall at 9:55 AM