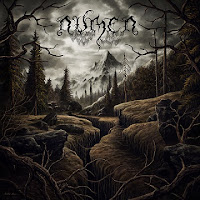 Numen has always stood out among Europe's pagan/black metal pioneers for its use of the Basque language for its lyrics, and for conveying the beliefs and folklore of that region through them. Just looking through the song titles you're faced with letter sequences foreign to you even when you're used to seeing Finnish, Latin or Slavic, and it's a mark of distinction that permeates the band both superficially and in the subject matter of their songs. Alas, one thing I often found a drawback is that this was probably the only really unique thing in a lot of their music. If you're expecting an atmospheric or overtly folk-flavored experience, you might be left hanging since that appears only scarcely through the material and maybe not in the sort of melodic content you might expect.

Oh, it's there a little in the chord choices and clamor of their song structures, or in little pieces like the instrumentation that closes out "Itzaletan solasean", but for the most part this is just a suffocation and often dizzying black metal experience. A blasting tumult that weighs heavily on its ability to beat your face in with its hyperactive aggression and the literal floods of chords that it creates. Now, these might take on a more flavorful, Romantic sort of atmosphere in of themselves, as in the depths of "Iraganeko errautsak", but for the most part these motherfuckers play fast, they play hard and you are not liable to forget that as you dig your way through the 47 minutes of material. There are some breaks where the band hits a slower or mid-tempo and simplifies the chord structures, and once the dust of the album clears they offer you an acoustic outro with narrator-like Basque vocals, but this is the sort of momentum and force targeted towards lovers of traditional, fast-driven Scandinavian or Scandinavian-influenced European fare like Marduk, Naer Mataron, 1349 and their ilk, only Numen have enough distinction through the cultural influence and chord choices that they can whip up a frenzy of their own that doesn't sound like a crass impersonation.

The production here is very straightforward, with the drums and guitars surging, bass filling in whatever gaps you might hear on the lower end. The vocals are a pretty standard rasp for the most part, and not a terribly interesting one, although to be fair they are being outclassed by those deluges of chords and tremolo picked black metal guitar passages which always shine brighter. I certainly thought that, while the tempo shifting here and dynamics are always clear, some of the tunes suffered a little encumbrance from trying to quash too much rhythmic change into a space that couldn't support it all, but on the whole you can tell these guys have been around for awhile and they handle the attack with sincerity and professionalism. Iluntasuna besarkatu nuen betiko is a solid effort with no question, and I found myself admiring the dedication and level of detail in the riff patterns. The production and the beautiful artwork are well suited to the sound, but I did feel that the material this time around wasn't the most memorable. Good riffs in the moment, but few moments resonating in my head long after the music ended.