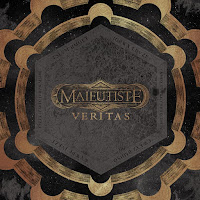 The eponymous 2015 debut from these Frenchman was a torrent of ideas fashioned into a cohesive but often overwhelming whole, as they wove together a number of metallic sub-styles; melodic black and death, doom, folk and progressive touches were omnipresent through that experience, and from the sounds of it that aspect of the band has not really changed with the sophomore effort Veritas. So go into this expecting a fair depth of complexity, not that individual riffing sequences are necessarily the most technical you'll run into, just that combined into the overall package, there's quite a lot going on and by the time you've ingested one of its elements, they will be all ready to dazzle you with the next. Fortunately, they're both great players and writers, with a lot of quality riffs on exhibition and it's a pleasure to lose oneself in their labyrinths of flavorful, morose hostility.

For example, within the first minute of the second track "Infinitus" you're run over by a bustling and claustrophobic mesh of melodic black metal riffs, and then the tune devolves into compelling, deep acoustic sounds and cleaner male chanting vocals which should definitely please fans of a Mikael Åkerfeldt, or the cleaner vocals employed by Enslaved and their peers. Then the almost jazzy, rhythmic currents erupt and I'm once again reminded of a group like Opeth if they were embedded in more of a storming black/death metal context rather than a pensive, naturalistic atmosphere. You will never know what you're about to face around any corner here..."Suspiramus" is essentially a brief neoclassical opera interlude, while "Universum" clouts you with these bold, tectonic mid-paced rhythms that feel like the Earth is stirring beneath your feet while the melodies ring out over an ever dimming sky above the turmoil. There is simply no moment that passes upon Veritas in which you can accuse the group of not being inspired, of creating a depth to their material that is vastly more interesting than your garden variety melodic black metal approach.

The musicianship is fluid and incredible without ever bordering on any sort of arrogance or lack of self-discipline. Maïeutiste is great in the calmer periods, like the spacious guitars in the lurching, doomed belly of "Vocat", and equally potent where they get the most intense, guitars blazing along in all manner of melodies and harmonies that ensure payoff for the listener. The drums are well done, both the harsh and clean vocals are perfectly fit to the patchwork of material, and there is a great wealth of dynamic range to their compositions to keep this interesting through multiple listens. It's probably a little more coherent than their debut, and I like it a fraction more, to the point that I'd heartily recommend if you're a fan of groups that transformed their more fundamental black metal roots into a more progressive, expansive sound later on, especially the Scandinavian masters, or perhaps Spain's Foscor is a good comparison even if they've progressed much further apace. Good band that painfully few people that talk about, another gem in that creatively overstocked French scene which remains one of the most interesting in the world.