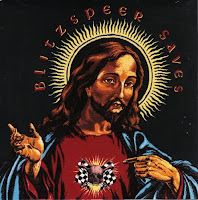 I remember first hearing Blitzspeer when a friend acquired their initial Live cassette out through Epic records, which I thought was unusual at the time for a debut to the public. They were kind of existing on that fringe edge of thrash metal, where they'd be associated in with other acts of that scene but didn't have a lot in common. I wasn't hugely impressed with that tape, but it's only now in exploring their sole studio album that I can really hash out why. These New Yorkers were essentially trapped between two worlds, a dirty hard rock band trapped inside a slightly heavier set of riffs that might occasionally place them within the punk rock or thrash ream. Not as outright cheesy or lame as a glam band, but you can hear just enough of that in the DNA to distract.

There's a lot of groovy hard rock here, and when they break out into some of those licks, as in the "Truck of Love" track, I wonder why they don't just do that exclusively, since it's their strength. The heavier, metallic riffs are a little dull, but when they get on more of a Guns & Roses or Skid Row meets Mind Funk trip they really sound like they're having a lot more fun. The guitar playing is solid, if only rarely exceptional since they have a lot of very dull riffs in their verses. On the other hand, when they do something like "City of Angels", which is more like a hybrid of punk and Sunset Strip rock excess, they are quite passable as a more sleazy alternative to Motorhead or the Ramones. Problem is the majority of the songs here have chord patterns that are quite uninspired, so no amount of glitz and attitude is going to edge that fact out. The drums are definitely poppy and rock-oriented, but the bassist is pretty good and keeps busy giving the lower end of the record a second of back alley boogie that makes you want to sell stolen watches from the inside of your leather jacket.

Vocalist Phil Caivano is an acquired taste, he's got a very grimy edge to his voice which works for some of this particular material, especially the chorus parts, but it's also a little hokey in spots. The leads are almost without exception bluesy and simplistic flourishes of rock & roll excess, but again they fit what Blitzspeer is trying to accomplish. Unfortunately, what they do end up accomplishing is in creating a record that doesn't quite seem to commit to either its heaviness or its sleeze, it never goes far enough over the top in either direction and seems to play it a little safe. I do feel that this sort of material would have gone over reasonably well at an 80s East Coast/NY club gig where you've got an audience mix of hairsprayed hard rockers, punk rejects and a few leather & spikes heshers, and perhaps that's the very reason they were inspired were hybridize their songwriting as such. Saves isn't without some degree of personality, it doesn't exactly suck, but it's more a throwback curiosity of a time when a lot of bands had to feel out where they wanted to travel sonically, and many got left by the roadside.