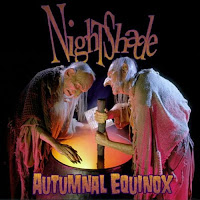 The biggest crime committed by Autumnal Equinox is that it's just so aesthetically scatterbrained, where from appearances alone it looks like it could have been a fun, campy Halloween metal romp which capitalized on the cheesiness of its themes. Essentially a one-off project by Rick Scythe, who you might know from the Midwest black death metal legends Usurper, and more recently the decent black thrash outfit of his namesake, Scythe; with a couple of his friends, and a drum machine, Nightshade seems like a primitive array of beats programmed to support over-saturated guitars and a mix of vocals that range from his nastier, familiar snarls to a deep Gothic timbre reminiscent of Andrew Eldritch and Peter Steele.

Stylistically it ranges from thrash to heavy metal, to punk riffs that recall The Misfits only clad in a heavier level of distortion and feeling too inorganic because of the drums. Although they lack the distinction that a few threads of Goth rock melody or unpredictable dissonance would give them, the rhythm guitars aren't written all that poorly, only configured into patterns you've heard before that aren't really enhanced or complemented by what's happening around them. The deep, clean vocals are effective enough for that style, but in several of the verse lines or choruses it almost seems like the band is letting us in on the joke, as they become increasingly goofy. Granted, there is no possibility a listener is bound to take Autumnal Equinox seriously. It's meant as a fun recording, but the lyrical content, samples, titles and so forth aren't actually that amusing or even sarcastically humorous, and the cleaner vocals come off like barely intelligible mumbling across half the songs.

It's a strange mix, and frankly if I didn't look at the date it was released out through Sempiternal Productions, I'd have thought it was some bizarre drunken bedroom reel from sometime in the 90s I had stumbled across, so it seems a little displaced from an era where it might actually feel like a lovably bad, sarcastic success. The song titles with subjects like "Midnight, Down in the Lab", "13 Spiders", "It Lives in the Lake" and "October's Scarecrow" all sound like they could be pretty entertaining if they adorned some fun horror punk songs, or even campy death metal like the sort put out by bands like Crypticus and Ghoul, but there's just not enough 'theme' dripping through them, despite the limited use of samples, haunted house keys, etc. The metal aspect of the record seems to be its driving force, but at best the riffs and drum machine make it sound like scraps from the cutting room floor of a Ministry or Rob Zombie record from nearly 20 years ago.

I can't hate on it all that much. It doesn't seem to be intended as anything more than an oddity, I've heard worse, and Rick Scythe seems like a genuine guy with some great material in Usurper and Scythe, just kind of screwing around here. Much of the disappointment for me comes by the aforementioned lack of focus, and because...just look at it. The crones on the cover with the dorky fonts look pretty entertaining, and the music that ends up on the album just isn't anywhere near that...imagine it were a fun Goth metal record with a huge kitschy influence from old punk and rockabilly, or just a really cheesy, awesome horror speed metal record from when they took cover photos like this.