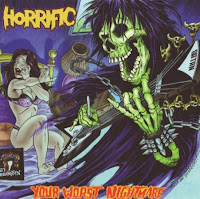 Many will recognize Slasher Dave immediately from his more visible band Acid Witch, a cool mash-up of death, doom and marijuana haze with a heavy lyrical emphasis on the horror genre. However, that wasn't Dave's only ticket to the creature feature, as he put together this very short-lived pet project called Horrific, which dropped an album on Razorback just a little after Witchtanic Hellucinations was unleashed. Your Worst Nightmare is a perfectly appropriate album to populate the basement of that label, a love letter to the camp and sleeze and nostalgia of the horror genre, for folks who loved flicks with really bad monsters, serial killers using signature items like guitars with drills on them, or whatever kept you up late at night watching cable TV throughout the 80s.

The style here is a departure from his mainstay, fueled heavily by rock & roll and barebones late 80s death metal, and yet rarely at all sounding like the Swedish 'death & roll' scene spearheaded by acts like Entombed or Desultory. The death metal element comes directly through the raunchy growls, carrion snarls and a few of the riffing selections that might burst into a tremolo picked passage, a few evil chords or a wailing, unhinged lead, whereas the rest of the material is purely 3-5 chord driven punk or rock rendered a little heavier just by nature of the vocal style and the genre Slasher is used to playing in. Guitars and straightforward, with a functional, sometimes boxy tone to the rhythms. The bass is a bit of a nonentity in the mix, and the drums are your basic rock and roll pace with perhaps a little added splash to support the weight of the vocals, which are overall the most prominent force across the album, matched only by the leads. A little bit of reverb on the growling so it occupies a cavernous plane slightly above the mix of the instruments, and Dave will apply snarls or weirder growling sustains just to give their presence more character.

This record has a lot of spunk to it and it's fairly fun to listen to, but most of the riff construction is entirely too generic. There are exceptions, tunes like "The Ultimate Sacrifyx" and "Orgy of the Bloody Parasites" which had moments that rocked my face off, but I feel like a little more creativity would have gone a long way towards what is otherwise an inoffensive, charming, nostalgic effort. The production seems a little dry, perhaps not due to the isolated instrument tones but just how they're all brought together, and a little more variation and dynamic range to the drums and bass guitar would make it feel more like a raucous stereo attack. The album has a few less riotous moments where the guitars are used to build more mood as in "Metal Cemetary", one of the other better tunes, so it does do the service of avoiding monotony, and the shit kicking punked out parts, as predictable as they seem, don't lack for energy, especially where the leads are applied.

Slasher Dave's head was in the right place here...with cool titles that pay tribute to some great horror cheese, and lyrics that, while almost painfully simple, really stick to the graveyard partying and a paean to playing metal and horror itself, with colorful poetry like 'Zombie fuck freaks attack!' He doesn't dress it all up with a bunch of samples or incidental horror music bits, or tackier synthesizers, not that these are things that couldn't work in conjunction with the stripped down rocking, but this is Guitar Driven 101 metal devoted to partying, killing, and spooking. It's not as good as Acid Witch, and so it makes sense that this project would evaporate while the other persisted, but if you're in the mood for stuff like Ghoul or Frightmare but simpler, it might fit the bill.