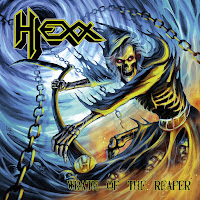 When it was announced that Hexx would be returning with a full length after so many years, I admit to some elation that we might be hearing the long-desired follow-up to their 1986 epic, Under the Spell, a mean and lean slab of heavy/power metal from the West Coat that to this day eludes the appreciation it deserves. I was never quite a fan of the band's death/thrash years up into the 90s, despite the competent, frenetic style they attained on Morbid Reality, which I would imagine was many fans' introduction to them. No, I truly hoped that whatever nostalgia or midlife crisis provoked the group into reformation would be one for their burning early years, and hearing the track "Burn or Boil", from last year's split with another veteran Californian act, Ruthless, with vocals similar to Dan Bryant's on the aforementioned 1986 sophomore, was everything I had hoped for. Fast, potent, memorable power/speed metal with only a few hints at the thrashier edge they spiraled off into right before their initial heat death. Even better: there was a version WITH Dan singing too, in their 2016 box set.

Fast forward, and to see the cover art to Wrath of the Reaper, and the heavily horror-emphasized themes and titles for the songs, I thought this was going to be one of those no-brainer comeback records, a strong showing akin to what comparable bands like Vicious Rumors and Attacker have mustered in their later years. While this is far from disappointing, and gets a few kicks in here or there, it's sadly a bit less consistent and memorable than I was anticipating. They've largely gone back to their roots, of that there is no question, but the bulk of the power metal material is slightly offset by a few thrashier moments like on the pounding, excellently-titled, opener "Macabre Procession of Spirits", which is simply not even close to one of the album's better tunes, and has little business being where it is. To be fair, though, a lot of what I'm hearing on the album is what I would have expected, workmanlike USPM, and the band plays around with dynamics, between anthemic, arena fist pumpers, speedy blitzes, and slower, more atmospheric mid paced pieces that erupt with manly power chord theater.

Cuts like "A Slave in Hell" and "Exhumed for the Reaping" are certainly worthy of that 1984 - 1986 era, and I think overall the production packs in plenty of nostalgia with the right level of gain on the guitars, elegantly threaded lead work that hits just at the right moments, and plenty of force in the drumming to give it the heaviness it needs for the 21st century. The riff structures range from the primacy of old Bay Area thrash and speed, to Maiden-esque triplets and most of what you'd find in between those two poles. Bass lines don't stand out very far in the mix, but you can hear them thudding and bounding along in step to the rhythm guitars, and overall when cranked up I thought the album sounded fulfilling enough through my speakers, and like the choice to avoid going too overly polished or neutered as you'll hear with a lot of modern power metal.

I guess the big question is, what do I think of new vocalist Eddy Vega? For a good chunk of the album, he maintains that harrowing, slicing, near-melodic style that Dan Bryant reigned with on the Under the Spell record, although it's slightly less beefy and catchy. Range is about right, but I was much more often reminded of Rob Halford getting nasty on Painkiller. In fact, there are places where his syllabic delivery and enunciation sounds EXACTLY like it belonged on that album, as with the second track "Screaming Sacrifice". He can also scream high coherently, as on the title track, another of the record's highlights, but in doing so he tends to feel a little more like any generic power metal singer and loses some of that edge and distinction that his predecessor possessed. Considering he's a new singer, Vega does a decent job, if not enough to truly distinguish himself among the field, but I hope he'll move forward by eking out a more unique, nuanced presence.

Overall, Wrath of the Reaper is a functional comeback album that positions Hexx back where, in my opinion at least, they were the strongest. Psycho-death/thrasher Hexx fans will undoubtedly appreciate this less than had they chosen instead to progress the Morbid Reality style, but there are means to find that fix elsewhere, like Sadus or Vektor. The horror themes are really cool, even if the music itself doesn't always lend itself to spookiness or 'evil' melodies as much as its manifests into an iron gauntlet to the face. I liked the album, even if I was hoping for more, and some songs are clearly stronger than others. It's also cool to hear vets like guitarist Dan Watson and drummer John Shafer pulling this off today. A natural fit for folks into Vicious Rumors, Liege Lord, Agent Steel, and Marshall Law, but I can't say it'll hit rotation for me as often as Under the Spell, or peer efforts like Giants of Canaan, Razorhead or Warball.