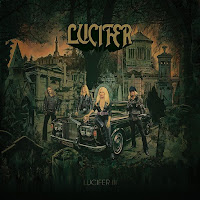 I like to imagine that the ascending Roman numerals Lucifer sticks on their successive albums are a 'leveling up' system, because within just the first few tracks, Lucifer III has already dominated the rock-solid earlier entries in their catalogue. A beefier tone, and a tendency towards some doomier riffs really helps round out their sound, making them feel, ironically, more true to their Rise Above Records roots than ever. The performances also seem to be a bit sharper, I mean we expect good things from all of these guys and gal, but it's down to the details here, such as leads, percussion choices and so forth that are just a lot catchier and better considered. That's not to knock the first two Lucifer albums, both of quality, but III is just jamming with memorable hooks, and it's not one I ever really want to skip through, even if I do have favorites.

"Ghosts" and the eternally groovy "Midnight Phantom" are just an awesome opening combo, the latter one of my choice cuts in their discography, but both have these doom breakdowns, the first some deep, evil riffs and a lead that cultivates a bit of Middle Easter mystique, and the latter just smoking with the clap percussion, the little howl that disappears into its nightscape, a smoking chorus and killer bridge groove which preludes a great little lead. And then, the hits keep coming as they stretch the net and welcome a lot of warmer 70s tones in "Leather Demon", "Pacific Blues" and "Flanked by Snakes". Or how about that "Coffin Fever", to which I could almost hear Lee Dorian laying vocals over...no wonder he originally signed this band! There is really nothing even bordering on a weak track here...it's a burning, soulful, bluesy and when it needs to be, heavy record in which every measure seems to have been well plotted. Lucifer is deceptively simple, but not as much as they could be, and so a lot of the little one-off bluesy licks, effects, pianos, or whatever you'll hear accompanying the central riffs are beautiful.

Johanna continues to dazzle, and I am continuously impressed by how much she pulls off with a range some might consider rather limited in scope. She's humble and emotive, like a lot of the 70s folk or female hard rock singers, and it's just a hypnotic contrast when paired up against the heavier, drubbing guitars or the wailing, bluesy solos. I love the clean tone they get, it's not terribly fuzzy, but super smooth and still feels just as 'stoner' as the messier psyche metal bands. The bass sounds perfect, locking in a fill or groove where it needs to stand out, and I don't think Nick's drumming requires any more praise than it's already gotten, but what is this, the fifth style the guy has excelled at in his long and illustrious career? Well I've gotta thank Nick and Johanna personally one of these days (maybe I just did), because they've put together one of the most bewitching, mellow and sneakily heavy retro hard rock bands I've heard in decades, and Lucifer III has gotten many plays over the last year. Bonus points for something my wife can listen to with me.