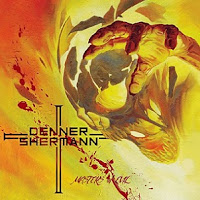 It wasn't long after the Satan's Tomb EP that Denner/Shermann would drop their first (and only) full-length album, with a cover even MORE reminiscent of the Mercyful Fate classic sophomore. So the idea this projects is that maybe they'd be getting a little more archaic in sound to resurrect the legendary vibes we are still all feeling off that 1984 staple (which, let's face it...you shouldn't have the right to VOTE if you don't own a copy of Don't Break the Oath). And maybe the music pulls that off, but only about 1-3% more than the prior EP. Nope, this is still a hybridization of the guitar duo's heavy, distinct grooving metal guitars interspersed with the more uppity, energized style of power metal that came out of the US scene in the 80s, and the intensification of Judas Priest in 1990...

Which is nothing to scoff at, in fact it's a great fucking idea, and to their credit, the Masters of Evil pull it off for the majority of this 42 minute run-time. Though they might seem slightly less frenetic than a few on the EP, these tunes are better structured, and Sean Peck is even more reserved, in fact this is one of my favorite of his performances ever on a studio album. He's got the pitch, the fierceness, and yet he reins it in at any opportunity, never losing himself off the top. He's a great compliment to the riffing might being manifest below him, and yet when necessary, like in the bowels of "Son of Satan", or the chorus of the title track, he lets go this amazing Halford scream which had me laughing and weeping tears of joy in unison. In fact, the mix and some of the lines he projects remind me a lot of Rob, just with the different natural timbre to his voice. Snowy Shaw is once again great on the mix, though I don't think his beats stand out from the other instruments as much as the EP (a good thing).

I also really enjoy the penchant for lurching into some "Carmina Burana" operatic moments, as if you'd just stepped into the heavy metal equivalent of The Omen, it just spices up what is otherwise a fun record with rolling riffs like "The Wolf Feeds at Night" or the title track. Not every riffing pattern is legendarily catchy, but there's clearly a ton of effort that went into this one, and the performances are set at just the right momentum to let the shrill vocals shine, which has always been one of Michael and Hank's fortes (the rest is history, right?) Masters of Evil is no Don't Break the Oath, but it's a damn good time which takes the DNA from that masterpiece and then combines it with some of the metal which followed it, like a Jurassic Park of heavy/power metal. A well written record that I haven't gotten tired of in a half-decade, but sadly another swan song from a project that was probably cut down too soon. I mean, if they took this material and then cultivated it even further, who knows what limit they might have crossed. But I'm happy to take what we've gotten.