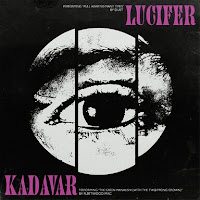 This split combining the talents of two of our better 70s-flavored retro hard rocking doom bands was sure to be a treat, with the caveat that they weren't performing material of their own, or even covering each others' songs, but instead diving back into the 60s and 70s to highlight some of their influences. So this one isn't quite like the later collaboration between Kadaver and Elder, where they literally make a record together, but more of an aesthetic coupling, and it actually works quite well. As a fan of both these bands, I thought they did a good job at taking the tunes and molding them into their own sounds, and would not be opposed to hearing them both dive deeper into those record bins of olde and infusing a lot more lost classics with their contemporary energy.

Okay, I don't know that "The Green Manalishi (With the Two Prong Crown)" qualifies as a 'lost' classic, but Germans Kadavar give it a slightly doomier spin to distance their version from other popular covers, the obvious being Judas Priest. So this one probably sounds a more earthy and '1969' in tone, with these rich, raw guitars that vibrate and resonate in a wonderful tone, and it's also got a real looseness to it, with lots of space in there to just vibe on you. It's pretty cool and sounds like it could be pulled off live in this same configuration at a 1:1 ratio. For Lucifer's contribution, they revisit "Pull Away/So Many Times" off of unsung New York heroes Dust's sophomore album Hard Attack. This is really brought into the fold of their own sound, and with a tweak or two would have fit snugly in any any of their four Roman numerated albums. Joanna sounds enchanting as always, but I liked too that they had her exchange with a male vocals, and both the acoustics and the rocking electric parts here sound really great.

The one downside is that this is here and gone in 10 minutes, while the covers are so tasteful and cool that I wish I could hear about an hour's worth of them from each band, not only to hear interpretations of songs I might already know diving through my own hard rock, prog and metal memories of that period, but possibly even to discover some new stuff I never explored. It probably isn't too costly to splurge for the 7" of this, and that seems the most fitting way to experience, but you can also check it out digitally, so do so, and then if you haven't already, check out all of Lucifer's albums, which are fucking ace (in ascending order of quality), and Kadavar records like Berlin, Rough Times, and especially for the Dead Travel Fast, which are also damn worthy. I think such influences really rub off on their own sounds and it's so great to hear this sort of heavy rock alive in the 2020s.