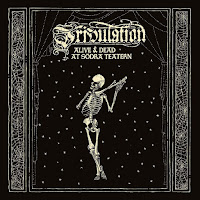 The real question I had when I saw that Tribulation had announced its first live album was just how well their diverse slate of material was going to jive together in that setting. I can totally hear The Formula of Death mixing in with their more Goth-oriented records Children of the Night and Down Below, but how would an audience react to tracks off The Horror and its far different, intense death/thrash sound? To be frank, as much as I've enjoyed their evolutions, that record is still my favorite due to its reckless, explosive songwriting and carnal sound, but I can understand why the band would want to leave it behind them as they explored their gloomier new territory, the contrast might be a little jarring when you're trying to set a mood on stage. Stranger things...have happened? Maybe an encore with the masterful "Beyond the Horror"?

But not here, because the two-disc live album wisely avoids the answer by offering material just off the three most recent albums to its own release. The first disc is Down Below performed in its entirety, and the second disc is a mix of The Formula of Death, Children of the Night and a few fresh live bits. At any rate, the recordings sound quite excellent, with a great mix of the band's riffing melancholy, hoarse rasped vocals and drumming thunder. The band has a tendency this last decade to play pensive, melodic and sorrow-saturated material which really needs the air to breathe to lay in on the audience, and this live offers just that. Crisp clarity that doesn't drain the rhythm guitar of power, well-performed leads that scream straight into the mix where they belong, extremely professional beyond even the bands' years; there are legacy metal acts with 30-40 years experience that will often put out sub-par live products that cannot even come close to matching this. And the set is amazing, even the intro/organ instrumental that sets up the second disc, and the beautiful guitar instrumental later on. Turns out the slightly more adventurous, proggy pieces off The Formula of Death mixed in quite well with the black & white melodic Goth/death. That wafting gloom is never lifted throughout, and I can only imagine breaking out into the death/thrash of their formative years would have probably spoiled the spell this can cast on the listener...EVEN in the context of the live disc.

You also get a DVD of the performance with some added bonus materials, and it might even be my preferred way to experience the music, with a funereal din to it thanks to the lighting and the way the musicians' faces are pretty much obscured throughout. The whole package is a victory for Century Media, a live product that is wholly worth the money a Tribulation fan will spend on it, appreciated largely by folks like myself who haven't had the pleasure yet to actually catch them on a stage. After listening through and watching this several times, that's something I need to put on my bucket list, but even if tragedy strikes and I'm unable to do so, this feels like its nearly as good as being there.

Posted by autothrall at 7:21 AM