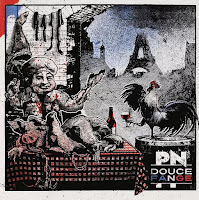 Why is it the most distinctly and/or disturbingly French black metal bands have the initials P. N.? Paris' Pensées Nocturnes might not answer that question with their seventh full-length Douce fange, but they will once again answer the calling of carnival-fresh, aurally anarchic and murderous black metal with a sax section, and they will answer that calling in an even more brazen way than on their 2019 oddity Grand Guignol Orchestra. This is a strange, STRANGE sound the group has put together, not only in how the metal content fuses with the other instruments and the almost tongue-in-cheek, mocking nature of its presentation, but in how they use a lot of bizarre, gonzo jazz elements with the brass and drumming that sound just as alien on their own cognizance.

Douce fange is a chaotic but controlled clutter of traditional black metal guitar aesthetics, wavering and haunting vocal lines that sound like a drunken street hawker, and the added confusion of all the brass that make it sound like a stinking circus stuffed down some Parisian back alley in the early 20th century. In general, the compositions are lurching, non-linear and completely inconsiderate of what arrangements your mind wishes to mold them into, but it's also consistently compelling. New tricks arrive at almost every street stall or corner, with more narrative spurts of vocals in native French, or eerier, dissonant atmospheric guitars. The bass playing has a fantastic, fat sound to it which rumbles around the shifting tides of the riffs, and the drummer sounds like he stepped in for a Miles Davis album and got a bunch of metal freaks instead, but then rises to the challenge. There are some truly intense and ridiculous passages like in "PN mais Costaud!" where the double bass starts going crazy and there's this whole array of wild screaming and growls along with the confusing but somehow structured guitar patterns, all to disappear into some softer tremolo picked lines, samples and horns, and it's that manic few measures that really sum up the album.

You've got to steel yourself for Douce fange, but its rewarding for its fearsome and lollygagging contrasts, and its not like the band just stumbled upon this, because the previous album was sort of a trial run for this mutation in the band's career. The production is very well balanced despite the almost sweltering randomness of how the tunes are laid out, and even the packaging lives up to the music with its collages of weird billets and advertisements for oddities and social unrest. Trust me, this is a CD booklet unlike any other you'll see this year, and it's quite impressive. I'm sure there's quite a lot to the concepts here I'm not fully understanding, even my wife who speaks French and lived there for a year was a little baffled. The schizophrenic and freeform nature of this music is one of a kind, and I find I keep picking out more details with each listen. It's like Shining and Mr. Bungle jamming while they all twirl a bunch of moustaches. Looney bin brilliance.