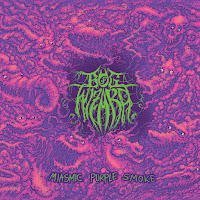 Michigan's dungeon mushroom doom masters pick up right where last year's From the Mire left off, with some of the most bludgeoning, drudging, simplistic stoner/doom metal you're like to experience. The focus here is entirely on drubbing you repeatedly with a hook until you finally submit to it, no matter how brute or dumb it first sounds, and then right when you feel like you're endlessly slogging along, an ambulatory corpse propelled by the weight of necromantic suggestion, they come at you with some more epic, clean chorus riff that somehow elevates the whole experience from the fetid, tadpole-infested bongwaters to a tale of olde, high and mighty. The band prides itself on sounding like a bunch of Sabbath-addicted nerds crouched around Cheetos-finger-stained character sheets from some old D&D edition, rolling bones amidst the cloying stench of the last ganja score, and if you know much about me, this could only a compliment.

This is ugly, almost minimalistic doom which inhabits the border between traditional doom, sludge and a little epic heavy metal, as if they were Manilla Road mentality channeled through gnarly Bongzilla riff muscles, and much of Miasma Purple Smoke sticks to this pattern. The rhythm guitar patterns, which skulk alongside the thick, oozing bass-lines, are the antithesis of complexity, but that's exactly how this one sucks you in, especially on the first two tracks, "Barbaria" and "The Rogue", which I consider the best for their acidic, creepy higher vocals. The band also adopts some guttural snarls, which work well in the context, but for me this style never gets quite so memorable as the cleaner intonations, which themselves are often dowsed in effects that make them feel as if they're landing on you from the haze of a psyched out nightmare. Lead guitars are usually painfully basic and bluesy and contribute more as little atmospheric melodies than flashy exercises, and the band isn't above throwing you a curveball like the faster bridge in "The Rogue" where the drums pick up to a modest blast and it almost feels like drugged out black metal (which needs to be a thing a lot more often). You hear this again in "Stuck in the Muck", the mini-track where they almost transform into a weird, sludgy thrash with vocals of the Hetfield variety.

Risks are taken away from the steady muck-dredging, and they don't always succeed for me here. The brief instrumental "Grimdark" with its dim acoustic guitars doesn't add a lot to any of the tracks around it, although I think the subject of 'grimdark' fantasy itself is certainly well within the band's wheelhouse. The bluesier, early 70s Sabbath swagger of the title track is also pretty cool, but the vocals there sound a little strained, especially where they bring in an almost operatic, quivering guest vocal, and it's probably just an idea in need of a little more germination. The real strength of Miasmic Purple Smoke for me is the aforementioned first two tracks, and the excellent 12+ minute closer "The Void Beckons", a vitality-leeching psychedelic death trip with some synthy tones that really capture the acidic excess that the cover art might evoke...as simple as this one is, I was totally absorbed into it despite any level of repetition...the growls have a great reverb to them and it all just carries along so well. So overall there are about 30 minutes of the 40 here that I'd put right on the level with From the Mire, and well worth losing yourself to, but the shorter bits I could do without, and I had mixed feelings on the title track; I almost think that the band would be better suited to go more adventurous in their longer tracks rather than include the shorter diversions like "Grimdark" or "Stuck in the Muck".

All told, if you'd fancy a mellower, laid back, but subtly menacing sound in the vein of bands like Dopesmoker, Bongripper, Belzebong, Weedeater and Cough, this trio is onto something, and the fantastical influences are also a boon, even if a fraction less pronounced on this one.

Posted by autothrall at 4:52 PM