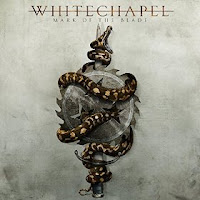 Mark of the Blade is at once a celebration of many of the bases touched upon by previous Whitechapel albums, and sort of a mixed bag that signifies they're not quite sure where they want to go or who they want to be right now. That's not to say it's a bad record, necessarily, because even as someone who has rarely enjoyed any of their output, I thought that this hit enough of a quote of entertaining moments to dub it one of their better efforts. But the bulk of the material here definitely seems like it's simultaneously exploratory and constantly looking backwards, trying to flesh out ideas they might not have taken to their natural conclusions in the past, yet not willing to go far enough to make them stick.

Production is total brickhouse, with a mixture of thrashy melodeath rhythm guitars that feed into fat-bottomed grooves which themselves teeter between the djent and deathcore niches, without much resolution as to which side of that fence they're going to land on. The bass guitar has this enormous, bouncy tone which you can really feel in your stomach when they bust into the meathead hardcore breakdowns, almost like some heavily tatted GQ dudes are lining up to use your gut as a trampoline for their fists. But they also go for some brief, intimate moments like the intro to "Bring Me Home" where they're attempting to show off their sensitive side, clean guitar sounds and soothing vocals and a progression which almost reminded me of Tool or A Perfect Circle before the requisite clobbering rhythms begin. Tremolo picked melodies are often added as layers beneath the dense, roiling strata of mosh-oriented violence to add a little bit of a post-modern feel to the brocore step that they're often pretty loyal to, and the hoarse and antagonistic vocals of Phil Bozeman definitely sound as angry as I've heard in the past, especially in the lyrics to songs like "Tormented" or "Elitist Ones" where they definitely have a Hatebreed-like social hardcore aesthetic with even a little hip-hop or Biohazard to the syllable choices.

Hell, along with the pork-toned bass in the latter, it's quite funny to the point that I broke out laughing...but you wouldn't wanna get run down by these dudes in an alley regardless. Neither would I. The joke would be over then, as they beat me within an inch of never reviewing a deathcore band again. But yeah, there are lots of little deviations here or there where the aggression will cut out and they'll launch into something which feels progressive by comparison, and that actually creates an air of nuance to what they've recorded here. I can't accuse Whitechapel of not trying to write actual songs, or not trying to better themselves, because I feel like they're doing both. It's whether or not the riffs or the lyrics resonate with me here that matters, and to my chagrin, they really did not. Not for a lack of effort, though, and to their credit, they've done a far better job with this than their shoddy last album, Our Endless War, while still flirting with the more accessible goals of that album and then mixing 'em up with the 'classic' 2007-2010 era and a bit of the finesse of the self-titled disc (which remains my favorite). Hell, my 3-year old was going mental to this shit, jumping up and down on our futon and did a somersault or two into other nearby furniture. So...that there is something. Not a lot. But enough.