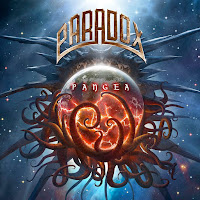 If you had asked me back in the late 80s if I thought I'd still be listening to Paradox in the future, my younger self would have answered with a hopeful but resounding 'probably not'. And yet it's 2016, the Germans are on the most productive tear of their career since they launched Electrify in 2008, and now have delivered yet another exemplary example of how brainy, agile, energetic power thrash is alive and well in an era which has already grown sour on those younger acts who wish to recycle some particular era and sound and do it little more than a hollow tribute. Pangea is filled to the brim with melodic, intricate rhythm guitar weavings which mirror all the finesse of that more technical Teutonic tier which followed in the footsteps of Destruction and Kreator with a little less of the raw savagery of those bands' in their infancy, but lacking none of the intensity. Much more akin to Deathrow, Mekong Delta, and Vendetta than Sodom, but where some of those bands languish in the reunion epoch, Paradox show almost no sign of aging or weariness.

Spry, well-developed thrash pieces with a little bit of that clinical depth and 'edge' that the band picked up for their sophomore Heresy in 1989 but have been meting out with modern, ironclad force throughout the last decade on killer discs like Electrify and Riot Squad. The busier riffing patterns on the album are redolent of Artillery's uplifting vortex of complex power/thrash, with cascades of atmospheric melodies affixed to the meatier undertone, thick and thrumming bass-lines and a drum performance which is just as electrifying as it needs to be, with forceful kicks driving the bottom end and balancing out against the higher pitched tonality which is the guitars' focus. Just a galloping, swollen arsenal of progressions that don't feel exhausted or mindlessly retrospect in nature, even where they tie back to the band's legacy of 27-30 years back. Leads that are carefully threaded over the rhythm guitars in the bridge, seemingly a lost art where many bands seek to smother the most boring patterns they can with wild frivolity. In listening through Pangea, I had a basic idea of where the songs would twist and turn, largely because I've got all their earlier records and listened to them often, but even despite that, it never otherwise felt predictable or lazy at any point here.

Charly Steinhauer still maintains that fragile, mid-to-high pitched voice which sounds more like he's recording desperate scientific research than barking at a crowd, and this has long been one of the factors which stood certain of these bands (Deathrow, too) against their more popular snarling and sneering countrymen. But that engaging level of tech power metal also thrives in their sound, a style not incomparable to Americans like Heathen and Forbidden which exhibits a parallel development from when all these bands were on the cusp of being the 'next' big thing, but fizzled out once the genre was subverted by groove metal, rapcore and grunge in the 90s. Consistent, ambitious, and yet varied enough to form one of those prehistoric concepts: the actual ALBUM worth of songs you might give a damn about. I won't claim that every single measure here is pure ear candy, many of them simply serve the whole as best they can, but there are no duds among this bunch and it's every big the equal of their prior benchmarks like Heresy and Electrify. Awesome. I've listened to this a dozen times already, front to back.