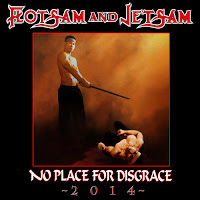 It's not all that uncommon these days for veteran thrash and heavy metal acts to offer up re-recordings of particular albums, or even to throw together a compilation of hand picked tracks that have been reworked in a studio to give the modern fanbase a taste of what their classic material should sound like when brought up to the standards of their recent fare. Perhaps it's a bunch of songs the band uses live, and they want kids to be able to grab the newer versions to play on their .mp3 players with more compression. Whatever the cause, it generally fails, and also serves to confuse and convolute a legacy best appreciated through experiencing the originals, for all their flaws. That's not ALWAYS the case...for instance, I rather dug Destruction's ironclad Thrash Anthems re-recordings, the songs seemed to work in the context of their modern hits like those found on The Antichrist. But the odds, they are against it.

I consider Flotsam & Jetsam's sophomore No Place for Disgrace (1988) to be their seminal work, unrivaled by anything else they've ever recorded. Maybe they felt the same, since they saw fit to spend the effort re-recording it. Granted, if I had one complaint about the original, it would have been in the production department, since it just doesn't hold up quite like other albums I own from its era. The guitars and bass seem a little thin, and it's lacking some punch. However, the fantastic tracks there easily overcame, and continue to overcome such nitpicking, and that's sort of what I meant above. It's 'flawed', but despite that one of the more memorable second tier US thrash albums of its day and age. I didn't hold out a lot of hope for this remake once becoming aware of it, because this is just not a band that has really delivered consistently, and I expected them to flub it up. They've had a couple good songs strewn about their substantial discography of the 90s and 00s, but they were vastly outnumbered by all of the disappointments. Reviewing this now, after hearing their latest eponymous disc, which I actually enjoy, I think they might also have been trying to fire up some inspiration by revisiting this material...

And to its credit, the 2014 No Place for Disgrace doesn't suck. It's not good, not even really worth the while, but I've certainly heard bands shit all over their histories, when this is just sort of taking a long leak on one. The rhythm guitars are 'richer' and have a little more punch commensurate with their most recent material, and certainly this lacks some of the issues with the original. But it also springs up more...Flotsam & Jetsam just doesn't sound as vital and hopeful as they once were. Part of this is in Eric A.K.'s performance, which doesn't seem as engaging or high pitched as it once felt. He's firing for a wider range on these recordings, and a long-time fan will notice the gulfs where he missed the mark at some of those critical moments. The clarity of several guitars seems to have leeched the speed from a number of the riffs, and this might even have been intentional, I didn't sit there keeping pace with both simultaneously, but the vivacious energy is missing, especially during slower parts like the the breakdown in "N.E. Terror" which feels like a slog, and in which Knudson's voice does seem a little processed (as it does elsewhere here).

Now, there are a few sequences in which the remake does feel solid, as in the intro to "I Live You Die", but even there I don't think I'd choose this over the old one. The drums and bass are much better balanced, especially the latter, which is all over the thing...so I might not have reminded a 'remaster', maybe using this bassist (he had appeared on a prior demo, but only rejoined the band for this and their new album). On the whole, though, this just feels like a band trying to tap into a prior impulse and coming up slightly short. It's not offensive, and a lot of the note patterns come together with that same magic they once did, yet I don't really think I'd ever require another listen to this after jotting down some thoughts. Fortunately, the band has since produced some newer material which is a lot more exciting to me, but I hope there are no plans to give Doomsday for the Deceiver such a treatment.