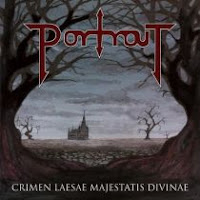 Portrait is the 'other' Swedish band to ride the King Diamond, Mercyful Fate coattails into a deal with Metal Blade, but they've got a slightly different focus than their countrymen In Solitude. Nostalgia is still a major factor in the songwriting, and yet Crimen Laesae Majestatis Divinae bears a lot more in common with the King's earlier solo albums like Fatal Portrait and Abigail than, say, Don't Break the Oath or In the Shadows. However, there are a few points upon this album in which the music reflects a broader worship of 80s era Combat and Metal Blade speed/heavy metal recordings circa Leatherwolf, Abattoir, Exciter, Obsession, etc, and the seasoned balance of dirty rhythms and blazing, often elegant leads and melodies makes for an exciting listen experienced despite the obvious derivation.

Per Lengstedt handles the vocal duties here, and the man is no stranger to savage Swedish speed metal aesthetics, having also fronted Overdrive. His delivery is a mix of gritty, mid range acid redolent of US bands like Armored Saint and Lääz Rockit in their early to mid 80s heyday, and straight up Kim Petersen shrieking, though it takes a few songs before either of the styles wins out. For example, apart from a few shrill lines and the La Rocque-like guitars in opener "Beast of Fire", one can't draw the direct connection; while "Infinite Descension" might have been right at home on either Don't Breath the Oath or Fatal Portrait, Lengstedt aping both the King's trademark cries and his mid-range (which In Solitude sticks to almost exclusively), and a good chunk of the ensuing record then continues to follow in that unhinged, noisy and haunting pattern, though lyrically these guys dwell more on occult and mythological fixtures than any coherent narrative.

The similarities don't end in the vocals, of course, and the guitars definitely have a bit of that breakneck intensity and solid melodic glaze that was so prominent in the Danish monarch's output through the 80s. Tracks like "Bloodbath" and "The Nightcomers" kick some serious ass with a slew of dynamic and memorable riffs whose tones breed true to the production of the albums that clearly inspired them, and the finale "Der Todesking" is a 9+ minute beast which ranges from stringy spikes of melody to raging mid-paced fist shaking to even a tranquil bridge breakdown which is the equivalent of stumbling across some calm amidst a hurricane. There's also a quite nice instrumental here, "The Wilderness Beyond" in which I was mildly, delightfully reminded yet again of King Diamond (in this case, "Insanity" from The Eye). Overall, I don't think there's a single song on Crimen Laesae which fails to adhere to a sleek, blissful miasma.

That said, it's not entirely perfect. Some of the shrieking gets on the nerves after awhile, since it's more loud and copious in the mix, and thus headaches are certainly possible. There's also the fact that, whenever Per is wailing his lungs and pipes to the limit, it's hard not to think that the apple is falling a bit too close to the tree of its creative forebear. Imitation is the sincerest form of flattery, and I get that, but I'd be pretty curious to pick the King's brain over this. In addition, while the album is fun enough to sit through, I wouldn't call most of its individual riffs exactly 'memorable'. The raw, 80s compositional elements and structural variation keep it interesting once in the mood, but there are very few chorus parts or melodies that resonate long after the album ends. I liked it more than In Solitude's sophomore, but it's not nearly at the level of a Them, Melissa, or Abigail, and how could it be?