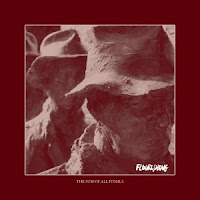 Albums like The Sum of All Fossils might only come around rarely, but they're the primary reason I meticulously scour message boards and blogs for recommendations and obscurities each year. Without such, I might never have heard of Flourishing or experienced what has easily escalated into one of my favorite metallic efforts of late. The Sum of All Fossils might not be 'entirely' a metal album, to be sure, but what's so marvelous about this New York trio is its ability to mash up dissonant post-punk and post-hardcore guitars with the excitement, intensity and vocals of the death metal genre and not come off as pretentious, snotty or even remotely 'cool'. I mean that as the highest compliment, of course, because for all this band's humble presentation and execution, they've got one of the tightest, freshest and most engrossing sounds on the East Coast.

If I told you this was like the bastard child of classic Immolation and Fugazi, you might not believe me, and yet I feel compelled to describe it as just that. The gutturals of guitarist Garrett Bussanick have a bit of Pestilence/Asphyx titan Martin van Drunen appeal to them, broad and bloodied and capable of driven, hostile emotions amidst the carnage, well suited to the copious and roiling guitar tone. Curiously, the more aggressive guitars of the album don't immediately come off as all that unique or inspired, but it's how they interact with the warmer, melodic textures throughout the album that has completely won me over. Thudding, distorted bass lines are wrought against the leaden density of the guitars, while the drums are capable of a dynamic range of double bass, blasting and whatever suits the more atmospheric passages that speckle the album's gritty, urban landscape.

Not a track goes by with out some brilliant, beautiful and frankly unexpected burst of warmth and fluid melody that reflects the band's indie/noise rock and post-hardcore influences, and thus a precarious bond is made with the listener. You know that 'money shot' riff is coming (or more than one), you just don't know when, but for eight tracks and 44 minutes, I can promise you that Flourishing does not fail to earn its keep. In "The Prospects of Rejection", it's that bombing, bass tone that cedes to the groove of the drums at the intro, or the melodic chugs around the 4 minute mark that lead to the trilling higher notes. In "By Which We're Cemented", it's the sparse harmonic notes that writhe atop the pump of the bass while the band barks out a cleaner, more angst-filled vocal style. In "Fossil Record", perhaps my favorite of the album's many highlights, it can be found in the airy, shoegazing abstraction in the bridge and the subsequent rock riff that sounds staggering under the brutal gutturals.

But if you're worried that my description of this album makes it seem too 'pretty', then I must assure you that is not the case. Flourishing will beat the living spirit out of your limbs with its percussive, corpulent textures and then use its more tranquil, resonant passages to sweep up the chunks of inanimate bone and marrow that remain. The lyrics are written in that emotional, matter of fact narrative abstraction I often equate with post-hardcore or artsy metalcore bands (Converge, Trap Them, etc), but they're an amazingly congruent and effective partner to the composition and pacing of the record. Ultimately, if you've been searching out something new and profound in metal, and you're not averse to the exterior influences I've mentioned here, then The Sum of All Fossils is the one you've been awaiting. I'm struggling to even come up with accurate contemporary comparisons. Bands like Castevet, Krallice and Ulcerate certainly bring a similar range to the table, but this album reduces their collective output to cinders before the smoke from the first track clears. The Sum of All Fossils might not look like much, but... Oh hell, yes it does. Just check it out.