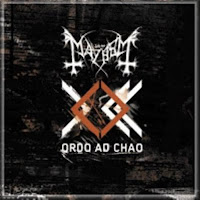 Man, I would not want to be Attila Csihar's psychiatrist, nor would I even want to sit in on such a session. I'd quickly lose touch with all his various accumulated personalities, dizzied by his emotional contrasts. But then, I'm not really talking about an hour with a licensed shrink, but the 40 minutes one spends locked into the vices and disjointed devices of Ordo Ad Chao, the fourth Mayhem full-length in a career well over two decades deep. Attila returned to the fold shortly after the release of Chimera, Maniac off to pursue other interests, and yet again we are faced with a massive transformation in the band's core sound. If you thought the leap between Wolf's Lair Abyss and Grand Declaration of War was wide, then compare and contrast this one to its predecessor.

Ordo Ad Chao is quite the antithesis of Chimera. Where that album boasted some punishing and slick production values, meaty guitar tones and violent yet dynamic riffing, this one sounds as if its being performed in the basement beneath you. Like you're a fly on the wall of some infernal, subterranean gathering. In fact, it might not be a bad idea to discount this as a Mayhem album altogether, but instead what might occur if a trio of known and respected Norwegian musicians brought a tape recorder along to an unfortunate encounter with a bag of bad mushrooms. Or, if you will, a deconstruction of the principles upon which the previous full-lengths were built. Up to this point, I realize I'm not painting a very positive outlook on this album, but in truth I did actually enjoy it quite a lot.

Or 'not enjoy' it, depending on your perspective.

Csihar was hardly a candidate for sanity on De Mysteriis Dom Sathanas 13 years prior, but the guy is simply all over this thing, as if it were some galleria of sickness. He very often seems to be improvising his lines, for how else could such a clutter manifest itself and still manage to seem authentic. In "Key to the Storms", he transforms from a sobbing, decrepit miser into a cackling lunatic. In "Anti", his guttural growls and heightened shrieks are enough to send anyone to the suicidal hotline. Wants us to hear every tremor upon his tongue. The schizophrenia and sadness presented through these eight pieces is a noted contrast to Maniac's more robust delivery on the last album. Sure, neither of these guys are the first you'd want to invite to a family dinner, but Attila's performance is far more scatterbrained and broken, which fits the music here like a needle to a vein.

Yet, while he's clearly the side attraction here, it's the music itself which takes center stage at the asylum talent show. Ordo Ad Chao is by far the least comfortable of Mayhem's records, in that it seems to shun the concepts of accessible melody and predictable structure altogether. Both the guitars and bass were performed by Blasphemer, and he seems to second guess himself through the whole runtime, offering sodden, dissonant grooves and brief spurts of razor tight tremolo licks that immediately pierce the surrounding atmosphere (as in "Great Work of Ages"). Even more bizarre: the drums. Hellhammer lays down a lot of grooves here, but he also bursts into some sick footwork on tracks like "Deconsecrate" and "Illuminate Eliminate" which is so damn dense and thundering that it almost explodes right out of the muffled, tenebrous mix that drags the entire album down into the murk of desolate, metaphysical symbolism of the lyrics.

And that (the sound) will understandably prove a hurdle for most. Clearly we're looking at an entire different realm of aural transgression here, which bears more in common with most of the recent cavern-core retro death of the past few years than the black metal genre. In fact, outside from a few of the riffs and growls, it feels more like a somnolent, perturbing death metal journey than one we'd normally associate with Mayhem. The intentional under-wrought production is all too fitting to the composition, or rather the 'lack' of composition, and I can't see how else it would come across so harrowing and adventurous. Unlike other deconstruction's of sound, like 1349's miserable Revelations of the Black Flame, Ordo Ad Chao is almost hypnotic. A lattice of swollen, infected veins that loose pus into the listener's ears. A vortex of grime and agony. A welcome therapy for the mad, BY the mad.