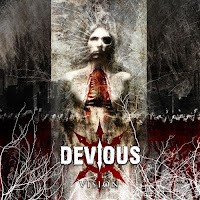 Devious's previous album from 2007, Domain, was an excellent effort of old school death and thrash metal conjoined into a modern medium, with a great many memorable riffs and a solid atmosphere. Naturally I've been excited to hear the follow-up, and while Vision feels a little deeper and there is less of an immediate catchy feeling, it's a more brutal record which is every bit the equal of its predecessor. There is a little less thrash on this record, instead it goes toe to toe with most modern death metal bands. The riffs are grooving and brutal, but laden in all manner of amazing melodies. Synthesizers resound off into the atmosphere, used sparsely and efficiently to achieve an epic environment.

Vision is really what I want to hear from a modern death metal release. It honors all of its influences while forging a dark new path. Everything from a little earlier Hypocrisy to a nod at Polish bands like Vader, but both brutal and musical enough to appeal to almost any fan of well performed, produced death. "Heritage of the Reckless" is a jaw dropping opener, from its gorgeous and moribund orchestration to the arrival of downtrodden melodies and relentless, grooving guitars that slam over you like a squad of infernal tanks. The riffs that start at 2:40 are fucking incredible, like a more technical modern Pestilence. "False Identity" opens with a huge, technical groove, with more bottom end to the mutes than most Atlanta nightclubs and a swerving column of chords that emit monolithic atmosphere. "Respiration of Fear" transforms from New Age/electro into a deep melodeath thrash, with great riffs to offset any feel of derivation that similar bands often lapse into. "Abide" has a great sample from the Merovingian in Matrix Reloaded, and then rolls forward like a more melodic Hail of Bullets, or modern Hypocrisy hymn.

Sold yet? But wait, there's more! "Impulse Overload" is a brutal slugging chug track which should create a jerking motion in all of your limbs, controlling you to acts of violent impulse against whatever is closest, an object or person. Like Suffocation and Vader if half their members had passed out from food poisoning, and the remainder had to fuse together to perform a track. "Predefined" teases you with a rolling orchestra that busts out into a Pestilence style groove, then erupting into a flurry of melodic speed. "Validate" is better and more brutal melodic death than almost anything else I've heard lately, firmly anchored in the palm mutes while the tones of deep synth and bass permeate the mix. The album closes with "Disconnect", another track which can merge touches of orchestration into a mesmerizing, complex atmosphere that is beyond compelling. In fact, I am reminded slightly of the last few Septic Flesh albums, where the brutality and operatic nature swells together. Only more surgical.

Vision is a clear statement of just that...a progression forward for a band who was already showing signs of greatness on their previous full-length. The album is modern and exciting without abandoning any of its values and influences, and it sounds simply stunning in the mix. Technical without being indulgent, the band is always balancing its melody writing with the brickhouse brutality below. I'll be clear: if you hate all modern flourishes, melodic death metal elements and massive studio production in your death metal, you should avoid this like the plague, and have fun living in the past. If you want to hear a respectable effort that strives towards a future without letting go of the roots, send your money to Devious. It will keep them working, and we will be the ones to profit.

Highlights: getting hammered into the floor and not wanting to get up.

Really into this. I am usually turned off by a lot of the elements in this band, but they put everything together very well. An awesome release.