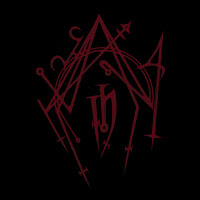 Hyrgal would be an easy band to go unnoticed in a lineup, what with their simple and minimalistic album covers and the fact that they perform their black metal in a less esoteric and outsider fashion than French peers like Deathspell Omega or Blut Aus Nord. But that doesn't mean they should be overlooked, because they produce an effective, haunting, atonal style which is heavily rooted in the conventions of the genre, but not afraid to bend a few atmospheres to come across as more atmospheric and modern, and in that way they DO occasionally bear some semblance to the more popular peers. The band really knocked it out of the park with their sophomore Fin de règne last year, and have already returned for an eponymous follow-up, whose very nature seems to veer towards an even more 'back-to-basics' form than the first two...

...and that's essentially what this is. Hyrgal is not an album with too many surprises, just a straight rush of slow to moderately fast paced traditional black metal, trending towards a little more epic feel in its slower sequences, where the atmosphere takes a stronger hold of the listener, as in "Legende noire" with its bridge full of cascading chords, ambience created through and behind the guitars, mournful leads, rumbling drums and a vocal style that can often transform from the expected rasp into something a bit more throaty, emotional from the chest. They don't saturate the stuff in bright, shiny synths, but conjure up fear and despair through feedback and background noise before slamming into the darker, depressive, blasting segments. There is always a little some extra beyond just the minimum, bare-bones that the riffs and beats would produce thanks to the layering in of leads or melodies, and to be honest, I actually preferred the areas of this record where the band let the darkness breathe a little.

Once they go into blast-mode, it's still fairly effective, especially when hitting some climactic blend of airy guitars and vocal drawl, but sometimes the drumming and rhythm guitars blend into monotony, only to save you with a slightly less predictable, dissonant chord pattern (as in "Vermines"). This is not an album you'll find instant gratification with if you just want some sinister, earworm riffs, it's instead something you've got to put in the commitment with, not a terrible tax as the whole affair wraps up in under 40 minutes. I don't know that I quite enjoyed this one as much as its predecessors, but there is plenty of talent in how they've structured it and remained so deathly loyal to such an oppressive, bleak style that holds up without requiring excessively raw production. Dependable if not terribly dynamic in scope.

Posted by autothrall at 2:13 PM