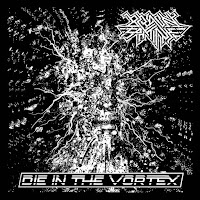 Brain Famine is an exciting local Massachusetts prospect which performs an explosive melding of death, grind and thrash, meticulously sculpted so punch more riffs through in mere moments than a lot of bands can do over much lengthier tracks. This would be enough on its own, but add to that a judicious use of eerie melodies or leads that will catch you off guard, and a harrowing vocal style that uses a bit of reverb and hoarseness to create this psychotic, splattering effect that is a lot more exciting than it might prove if he was just barking out your typical guttural or rasp. Die in the Vortex is their second full-length, unsigned for some reason (a status that I'm sure will not last much longer if any labels WITHOUT a famined brain actually hear it), and a dizzying array of speed, technicality and aggression.

I'd almost say their sound is a fusion of something like modern Napalm Death, Altars of Madness and crossover hyper-thrash, that took just a couple semesters of Tech Death studies at the University of Abuse. Vocals bark out in patterns more familiar to the grind sphere, but the guitars that are much more bewildering than your usual four-chord speed-punk, and I for one appreciate the level of proficiency and ambition. Often they'll erupt into these nasty thrash sequences set to interesting, shuffling rhythms, but nothing lasts too long as the band jerks you into yet another memorable pattern that is simply too fast for my old neck to headbang along to. The lead guitars or more melodic runs are short and to the point, but yet another element of elevation which makes the experience even more compelling and well-rounded. The bass tone here is effective, thick and punchy, while the drums are a verifiable tornado of technical aptitude which perfectly compliments the rest. Lyrics and titles are also sharp as a tack, hell I was an English major and I had to look up two words as I was listening through this one (I'm sure you can guess in the track list).

It's REALLY intense, and if you're not ready for it, Die in the Vortex might prove exhausting, but again, most the tracks here are kept very concise between 2-3 minutes, so you don't even have time to realize that your head is about to spin off before it does. The one exception is "Endless March" at over 5, and to be honest I rather like that they space themselves out here, it's got a lot more of the intricate, excellent melodic guitar work and reminds me a lot more of brooding late 80s tech thrash (mid-to-late Coroner, for example). This album clocks in at around 23 minutes, so there isn't too much room, but I'm hoping more like this would appear to flesh out future full-lengths. That said, the area in which they specialize, the shorter, more spastic material is also so well done that I have no real complaints, but it could be better served with a little more of this variation to balance it out. Brain Famine is certainly one of our better local technical extreme metal acts at the moment, imagine Revocation as your gateway drug and then proceed directly to this, controlled bursts of 'off the hinge-ness' that will resonate and reward across multiple listens.