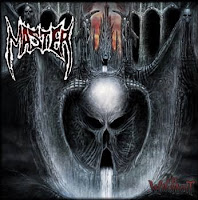 So I've never been the biggest Master fan, or really paid all that much attention to most of Paul Speckmann's output since the early years. To be more accurate, I enjoyed the first two records released through the Nuclear Blast label, in particular On the Seventh Day God Created... Master, and Death Strike's Fuckin' Death, but nothing much beyond that has ever stirred my interest. And even then, I wouldn't hail any of those albums as the masterpieces claimed by several denizens of the underground. Honest, confident, formative death metal, you'll get no arguments from me, and I've been listening to the genre since it was the title of a thrash song. Yet they just never had that extremely captivating sense of morbidity, pathos or surgical songwriting that I got out of my favorite death metal as a teen. Leprosy, Consuming Impulse, Altars of Madness, Left Hand Path, Symphonies of Sickness, Realm of Chaos...these were my go-to records for the time, and bands like Cianide, Cancer and Master just didn't cultivate that same sense of immediate identity or terror that drew me to the rest. Ultimately, I think I admire Speckmann more for his unending perseverance than the music he writes. This guy is a death metal icon, he's never yielded due to the lack of widespread success that several of his old peers have since celebrated; and he's stuck to his guns in terms of compositional aesthetics and lyrical themes.

I mention all this, because my reaction to The Witchhunt, Master's 12th full-length effort, is more or less a reflection of how I've felt about most of the half-dozen records I've heard since those crucial early 90s. This is solid, competent, old school death metal which stands in utter defiance of all trends past and present. You won't find Sunlight guitar tone, murmuring apocryphal subterranean gutturals, slam sections, or tech savvy instrumentation that shifts tempos on the drop of a dime. It's Master. A full-blooded Master experience which deviates very little from the music Paul was putting out almost a quarter century ago. That right there tells you whether you're going to love or hate it, or in my case, greet it with a lukewarm response. Not for a lack of trying, because truth be told, this is blazing with energy, as if the band hadn't aged a week since it's inception. Enthusiastic, hearkening back to a point at which death metal could still be considered 'fun' and not simply some 'fuck the world' lifestyle choice for antisocial troglodytes whose minds have obviously by devoured by basement mold. No cheats, no gimmicks, and lyrically centered on relevant social and political topics that most death metal bands seem to entirely eschew in favor of rape/murder fantasies or cosmic Lovecraftian horror. Perhaps that renders it 'unimaginative', or lacking in the otherworldly atmosphere some seek from the antiquity of nostalgic death metal, but it's honestly refreshing at the same time. In fact, you could consider Master a thrash, heavy metal, punk disposition wrapped in death metal flesh. That's always been the direction they've followed, and that's not about to change.

Also intact: Paul's vocals. Perhaps the most distinctive component of Master's sound across the ages are these raucous, gut-wrenching hybrid growl-snarls that really had little to compare with in the early years apart from someone like Chris Reifert. There's not as much of a sustained sneer as, say, Chuck Schuldiner, nor is he as over the top as John Tardy's growling, but there's no question that he creates the impression of a very sickened individual who's not afraid to offer a little variation. Often the vocals here will layer in an added rasp to create a Deicide-like effect, but personally I preferred it when he was just puking out individual lines with the ire he's known for. I wish I could speak as highly of his bass lines, but I generally found them more of a workmanlike accompaniment for the guitars. Granted, this is death metal of an era in which that was the common practice, and Speckmann's tone is certainly loud, pumping and present enough to add texture, but the note progressions don't really enhance the rhythm riffs beyond making the meatier and angrier. Zdeněk Pradlovský drums are set prominently in the mix, easily matching the rhythm guitars and vocals, and well suited to this organic, thrash-infused death metal aesthetic which requires energy more than technique...you won't get walls of blast-work, or kick-drum records being broken, but he beats away on his kit much like the riffs beat away on your face...not pretty, not polished, just real.

And speaking of the riffs...well, that's really what is going to make or break this or any other album, and I found the selection here earnest but left wanting. There really isn't a single unique idea on the album, but then that's not the point, so you're left with a mixture of classic tremolo picked sequences, thrashing outbreaks and stolid grooves that feel like a more muscular Slayer infused with Death and Massacre. There isn't a lot of dissonance here, and few of the chord or tremolo progressions feel particularly nasty or evil, but as a support system for the sicker vocals they're performed tightly and efficiently. When it comes to the chords, you get a nice level of hellish punk energy, and perhaps the most diverse riffing comes through the palm muted thrash-like breaks, which help vary up the 11 tracks well enough that it never gets too boring or repetitious. As for the leads, they're reasonably well implemented, wild but never sloppy, and show a decent range of technique, falling somewhere between spontaneity and careful planning. That said, like the rhythm guitars, they are rarely catchy enough to care about 15 minutes after the dust cloud of The Witchhunt has cleared your brain box. I felt like the further I got through the album, the more tracks sort of blended into one another. Not because they're all written exactly alike, but because the quality is relatively average.

The first three tunes ("The Witchhunt", "Plans of Hate", "Another Suicide") had me on board, but beyond that, once "Waiting for Die" kicked off with its mid-paced, Slayer-ish riffs I started to run up against the same wall I encountered when listening to other Master records, the general lack of outstanding riffs or songs. On an album like The Witchhunt, where the only atmosphere available is the sheer propulsion of the guitars and drums, the construction and stickiness of the note patterns is of paramount importance. There's a REASON people are still singing and playing along to Altars of Madness, Reign in Blood, Master of Puppets and Seven Churches all these years later. There's a REASON all those late 80s/1990 death metal choruses on records like Leprosy, Cause of Death and Mental Funeral were so memorable. It's not just because they were first (they very often weren't), it's because they were inspired. Speckmann's a tight vocalist, and this is a tight three piece fuckin' band, but there's just nothing here for the ages like Chuck growling out 'Denial of life!' over that morbid guitar line, or John Tardy retching forth 'Life goes on' in "Memories Remain" on a goddamn awesome Celtic Frost groove. Granted, those would be huge boots to fill for anyone, but Master just doesn't have those moments here or anywhere, and as a result, The Witchhunt is another record condemned to decency as opposed to exemplar status. Which, to be fair, is more than enough for some fans...just not this one. A good record, but they have (and can do) better.