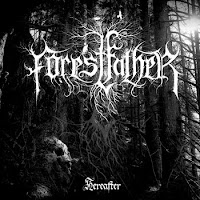 Proof positive of the power of online networking, Forestfather is a project long in gestation which was finally brought to light when original member Kveldulf (from Chile) inevitably collaborated with a pair of prolific US musicians, Jared Moran and Michael Rumple, who, between them, in particular Moran, have written and released a wealth of other ventures across numerous genres. In listening to Hereafter, though, you really can't tell that there's any sort of cultural gulf or distance between the members, because the five tracks here flow seamlessly across an emotional, folkish, black metal landscape; dark in a reflective sense but largely built upon crescendos of loss and rustic reverie. A number of styles are distributed equally across the 37 minutes of content, and more importantly the vocal arrangements offer a rather unique mesh of timbres that are simply not something you'll hear on many recordings in this niche.

There are probably four central themes to Kveldulf's playing here that are given even face time through the record. Bright, hazy drifts of chords performed at a moderate pace reminiscent of the mid-period Drudkh records, which are anchored by the most potent bass lines on the disc. Tasteful, folksy acoustic licks that transition rather well in and out of the distorted escalations. Dreamy, shoegaze-like, minimalist melodies that stretch into the highest elevations of rhythmic pitch on the record, while canvasing the other instruments (great example of this is after the 1:00 mark in "Ethereal", which is very true to its title) and creating some of the most haunting and effective instances of the experience. And lastly, there's a more savage, traditional black metal ethos with intense, melodic picking supported by the hammering double-bass lines. This was most impressive in the first half of the track "The Emerald Key", which had patterns that instantly summoned nostalgia within me for Borknagar records like The Olden Domain and The Archaic Course, not to mention Enslaved around that later 90s era. Shimmering, well-plotted, yet as solemn as a wall of granite.

I wouldn't necessarily say that the majority of the riffs here were equally memorable, but each cut has at least a few to distinguish it among the album as a whole, and Forestfather has a number of other distractions to help balance out any tedium I might have felt during the less interesting progressions: the foremost of which is the multi-pronged vocal attack here, in which a number of sharp, clean lines tend to take you by surprise. Far from a common commodity in this genre, Rumple's performance nevertheless sheds the strange Scandinavian soaring of an ICS Vortex for something more dagger-like and unnerving in shape, with some soothing and expressive harmonization that adds quite a lot to the rural imagery conjured up through the chords; not to  mention the crazy screaming in the back-end of "All Tears to Come", which is bloody fantastic. I wasn't half as immersed in the black snarls here, which are really par for the course, but in fairness there are some individual instances where the lines become wretched and ugly enough to really stand on their own. But I'd actually go so far to say that I would have preferred more of the harmonies here, since there are entire swaths of the record filled only by the rasps that don't feel nearly as refreshing.

Bass lines are silk-smooth, really finding their stride during the mid-paced sequences of the album where a groove is established to bolster the sad and pretty high-end picking patterns. The drums also feel fairly loud and natural without becoming obnoxious or drowning out the other performances. A lot are performed with a laconic, rock sensibility befitting the ebb and flow of the guitars, but numerous double kick sections and loud, abrasive fills help to challenge some of this tranquility; and there are some outright blasted components like in the latter half of "The Emerald Key" or in "The Days Ever-Done" which are more or less like a Frost/Pure Holocaust-era desperate charge through a blizzard. But, really, it's a testament to the variation here that even the percussion-less pieces, like the intro and bridge in "The Days Ever-Done" hold the attention through their composition and never give the listener any urge to be anywhere else. There's a dramatic egality across Hereafter, between its calms and storms, which seems meticulously structured without ever revealing any semblance of robotic predictability....

...that's not to say I loved every track equivocally, and was, in fact, rarely blown away here, but there was indeed something pleasant and compelling about the experience which rarely put me to sleep. For a debut, Hereafter is strong and self-assured, the sort of rustic acclimation that many black metal/folk artists seem to strive for without achieving. I felt transported to some woodland riverbank where a rucksack of supplies awaited my arrival, and then departed on a journey worth taking. Forestfather is not particularly 'evil' or sinister as far as black metal goes, nor is it happy and summery, but more like a long autumn afternoon hike when you are standing in the shadows of the trees just as often as a clearing, surrounded by withering foliage. A curious evolutionary nook between folk-era Ulver, Olden Domain Borknagar and the quixotic current flavors of bands like Wolves in the Throne Room, Woods of Ypres or Alcest...but certainly not restrained to these, there's really a lot of potential appeal here for anyone who wishes to whittle away his/her sorrows in a campfire headspace beyond the eavesdropping of humanity.