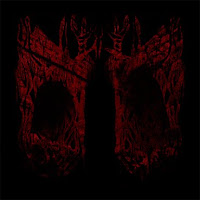 Balancing ambient and black metal aesthetics against one another efficiently is not as easy as it might sound, but it's this very coupling which saves Yayla's sophomore Sathimasal from becoming what might otherwise prove a relatively average blast off into the bowels of this super saturated genre. On the surface, this is a one man act from Turkey, with Emir Togrul performing all instruments and ominous vocals. He's created a clamor of sodden death and decay here which fully soaks the listener into its cavernous and oft chaotic disposition. Deeper and darker albums than this one are seldom experienced, but those not in the mood for dipping their heads into its churning, volatile ichor would be best avoiding it, because despite the tranquil transitions speckling its onslaught, this is neither subtle nor accessible by any stretch of the imagination.

As if to prime the audience directly for the ensuing punishment, Sathimasal opens with a 7+ minute rush of blasted instrumentality called "Fordreame Wonderlore". This is a long way to go without a structural change, yet it maintains its tempo with confidence while the synthesizers play off against the writhing, incendiary burst of early 90s Mayhem-like tremolo chords. Thankfully, the other four tracks, which are all considerably longer in duration, feature a wider dynamic. "Emperor; Elegy to Wars Never Fought" intersperses its own blasting with a delightful ambient/synth break seeped in angelic, shimmering choirs; or churns into a slower, molten groove above which Emir's vocals feel like disembodied spirits haunting a subterranean cathedral. "Conjurer; Prophetillars Will Hollow" has higher pitched riffing, tolling bell tones and a brighter rasp that seems to tear at its structure like a hell hound pawing and tearing at blood-tinted curtains. But my favorite track here was the nigh on 140minute closer, "Will to Walk Paths to No Temple" which almost felt like an underground alternative to Summoning, not only for the title but for how it moaning its obscurity over the broken beat, a current of dense and deadly sadness.

Sathimasal does often run into problems with its sense of overwhelming repetition, especially in the faster drum sequences, but this is hardly a unique issue to Yayla. A bit more variation would not hurt this music, in fact it would seem welcome in its expansive, hostile atmosphere. That said, I had an even greater issue with the production. It seems far too level, and as a result the vocals, which are distant to begin with, often find themselves too lost under the weight of the riffs and the savagery of the blasting, or the denseness of the keys. Perhaps if they were panned more, or if the voice itself was more eclectic in its percussive meter, it would become more prominent. Beyond these issues, Sathimasal delivers what it promises, a bleak and unnervingly drowning trip into the muted red arches of horror implied by its cover image. Try and envision a blacker, hyper interpretation of the ominous, resonant death of bands like Embrace of Thorns, Vasaeleth, or Mitochondrion only with a cavernous aesthetic and submerged keyboard eloquence not unlike the Australian project The Crevices Below; nearly always on the attack.