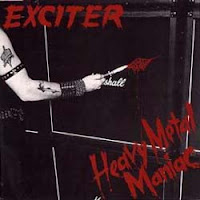 The sudden manifestation of a popular Exciter: The Story of Exciter documentary notwithstanding, Ontario's speed metal stalwarts are likely to go down in history as one of the longest surviving and little evolving acts in all the metallic canon to never quite get its due. They formed up in the late 70s, first as Hell Razor and later the Priest inspired Exciter, with an emphasis on the then-forward thinking sounds being popularized in both the English scene by Sabbath, Motörhead and the aforementioned Judas Priest, and riding the influence of North American hard rock circa KISS or Van Halen to a new level of aggression and 'excitement' well ahead of comparable Canadian legends like Anvil and Razor.

Thanks to an ironic yet important appearance on Shrapnel Records' seminal U.S. Metal Vol II LP, the band was able to sow its spikes and seeds into the minds of a broader fanbase here and overseas, and thus the full-length Heavy Metal Maniac was born, once more under the tasteful and sadly unsung Mike Varney and Shrapnel. More or less a re-skinning of their WWIII Heroes demo, it proved one of the more exciting North American speed/heavy metal albums in a year that produced Metallica's masterful Kill 'Em All, Manowar's Into Glory Ride, Anvil's Forged in Fire and Dokken's Breaking the Chains, but failed to catch on beyond the core audience for the style. Leather, studs, blood, knives and Marshall amplifiers were certainly eye catchers for the metal consumer of the day, but Exciter lacked the same level of sophistication that several of their peers were evoking, and perhaps their riffs and choruses didn't resonate quite so far...

But despite these setbacks, the debut insured the band's ability to perform and promote itself, and generated enough buzz within the industry that they secured further label support through Megaforce Records out of New York. Heavy Metal Maniac was not actually my first exposure to the band (I came into their sound through a cassette dub of Violence & Force), but in retrospect it's a fine album for its style and one that miraculously holds up nearly 30 years after its initial release. There's something genuine, dark, impulsive and testosterone fueled about this sort of record that seems to transcend time and age, perhaps not to the Arctic Monkeys crowd whose impression of 80s heavy metal is none other than the condescending hipster mockery that VH1's tragic popular video recycling and Metalocalypse taught them, but for those of us who were there and cared, or the newer generation of gateway trad metal fan that actually gives a damn.

Exciter was also cool in that they possessed one of those rare power trio configurations in which the drummer also doubled as the vocalist. Dan Beehler had a rabid, workmanlike, down to earth tone saturated with just the right amount of delay that cut out across the density of the guitar riffing. Never so refined or piercing as a Rob Halford or Joe Elliott, he generally hung about a mid range, but was still capable of a strident screech where it counted. In truth, I found his meter and delivery a bit similar to Bobby 'Blitz' Ellsworth' of Overkill on his earlier records like Feel the Fire and Taking Over, only not so violently wild, biting and infectious. That said, Beehler's kit skills were quite effective, whether laying into the slow Sabbath grooves of "Iron Dogs" or the more standard speed metal mid-pacing you'll encounter on most of the cuts like "Stand Up and Fight", "Under Attack" and "Cry of the Banshee". A bit tinnier in the mix than some might appreciate, but remember that this was essentially a demo tape and the Canadians were far from possessing an enormous studio budget.

Beehler is joined here by the other founding members, bassist Alan Johnson and guitarist John Ricci, the latter of whom many will recognize as the long standing spokesman and 'face' for the band, excepting Unveiling the Wicked (1986) and the s/t (1988) on which he had taken a brief departure from the lineup. Johnson approaches his lines with a festive, plum-picking thickness that he loads with grooves and fills. Sometimes he's doing his own thing, as heard in the intro piece "The Holocaust", but other times he's more or less creating a corpulent doppelganger to the rhythm guitar, especially in the faster riffs for tracks like "Mistress of Evil". As for Ricci, he's got a very obvious, weighted tone redolent of Black Sabbath, yet even more blue collar and raw, thriving on the a vivacious undercurrent of savagery rather than a miserable, gloomy din. One certainly hears a lot of punk in the chord constructions, a dash of Motörhead, but he's not afraid to implement brief, controlled dashes over higher strings, or a Van Halen-esque flange ("Heavy Metal Maniac") to create added depth.

The leads, on the other hand, seem entirely out of control, almost as if they were often improvised or squeezed in as an afterthought to various non-vocal sequences. For example, the solo in "Stand Up and Fight", while perfectly constrained to the bridge sequence, doesn't really stand out to my memory. But this was a symptom of much speed metal or thrash, used both to its detriment and success, and like everything else here, really goes with the times. Otherwise, Heavy Metal Maniac has a great pacing and structure. "The Holocaust" serves as a desolate, windy opener that cedes to the red rocket punch of "Stand Up and Fight", and for every few upbeat tracks they'll interject a slower piece like the potent "Iron Dogs" or the power ballad "Black Witch" so the listener doesn't ever feel like he's being clubbed in the face by the same tempo repeatedly.

There are unquestionably a few points here where the riffs seem a bit derivative of their more obvious influences. For instance, the pre-chorus chords in "Heavy Metal Maniac" feel like a ramped up "Detroit Rock City", and a few progressions seem as if they were paraphrased from various Sabbath and Priest predecessors, even if the same could be said of nearly anyone. Yet as the band themselves hint in one of the sweet 1982 audio interviews included with the 2005 Megaforce reissue, they were never bent on reinventing the wheel so much as regreasing it and dialing up the volume while they ran over the crowd. The only song here I can honestly say I don't enjoy to some degree is "Black Witch", primarily because Beehler's delivery of several of the lyrics is goofier than usual, and even where it picks up to a Sabbath like slower heaviness the guitars are admittedly boring. But everything else works damned well, including the bonus tracks "World War III" (from their U.S. Metal II appearance) and "Evil Sinner" with its gleaming intro harmonics and some impressive, sustained screaming via Dan Beehler.

Ultimately, Heavy Metal Maniac is not offering Kill 'Em All or Piece of Mind levels of quality and craftsmanship, nor is it even the best of Exciter's backlog, but it's a good example of its class that, to the proper ears, will sound just as refreshing as as it did in the mid-80s. To some extent, I feel that this band has never really attempted to tax itself aesthetically. They're quite content with their chosen sound and through their ten full-length albums (to date), have offered us only slight variations that generally coincide with the various lineup changes. But it's not as if we were short on innovators in this or any spectrum, and something can be said for the consistency of vision these Canadians cling to. Whether for a single night of passionate, headbanging release, or a completely leather-bound lifestyle, there's always going to be a time and place to experience music like this: and when you are ready, so too is Heavy Metal Maniac, waiting to embrace you with amplified enthusiasm.

Posted by autothrall at 9:18 AM