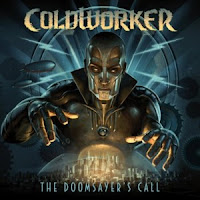 Coldworker is an act that has to date impressed me with both its prior full-lengths, but what I most find fascinating about this group is how they remind me of 80s English proto-grind acts like Napalm Death and Carcass and how they evolved their sounds into a structured, accessible brand of death metal, which for the time felt modern. To a large fraction of the audience, that was a good thing, and to a smaller number, a source of endless dismay, but thanks to such evolution, we have bands like this one who are unafraid to exchange some of that cult-punk credibility to expand their personal boundaries as musicians, explore a more dynamic stratum of metal without abandoning the core values of brutality.

Coldworker was never meant to be Nasum Mk. II, despite Anders' involvement, but its own distinct entity, yet some of those modern Swedish grind roots clearly shone through on the first albums, and to a lesser degree they remain. However, The Doomsayer's Call is easily the band's most diverse offering yet. Though I didn't ultimately find it so compelling as Rotting Paradise from 2008, it's an example of near flawless technical execution, not from the perspective of pure proficiency or wankery, because most of the riffing is appreciably down to earth, but the brick house polish of the rhythmic guitar punch and the ability to shift between grooving, angry mires of psychological death/thrash ("A New Era", "The Walls of Eryx") and explosive barrages of dissonant, blasted matter that teeters more on the 'extreme' ("The Reprobate", "Violent Society"). There are still bursts of that recognizable Nasum death/grind in a tune like "Vacuum Fields", but they're balanced off with tremolo muted sequences, sparse arpeggios and pensive spoken word vocals.

The influences are all over the place, from the dark octave grooving of "Flesh World" which will recall post-Altars Morbid Angel, to the sheer velocity of "The Glass Envelope" which Napalm Death might have recorded in the past decade, but Coldworker mix it all into a cohesion that continue to engage the listener through the full 13 tracks. That's not to say that I loved the album entirely: in fact I found it's the sort of fare that, while exciting to experience up front does not leave a huge impact in the memory. But this is not due to any lack of trying. They are metric boat loads of riffs here, and no song rests along some simple course, instead packing each minute with precision for both moshing and neck breaking. Anders Jakobsen is on fire, shifting tempos with mechanical ease and challenging himself far more than his own backlog, and the vocals of Joel Fornbrant are themselves quite percussive, though his delivery is often monotonous and familiar enough that I wouldn't call them a highlight of the recording.

In the end, though, The Doomsayer's Call does a heck of a lot right, and I'd easily recommend it to fans of Napalm Death, Benighted, Lock Up and Nasum. Don't expect the same sort of self indulgent brutality you get from a lot of the Californian tech DM bands so prevalent in this day and age, but if you're more into the manageable skill and beating that bands like Cannibal Corpse and Suffocation never fail to wring out of their recordings, then there's no reason you should not at least give this Swedish alternative a chance. A solid, dynamic and entertaining third album that strengthens their legacy.