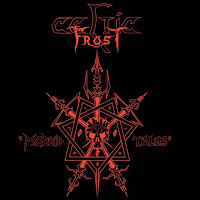 What I love most about the retrospective analysis of the metal music from my youth, that which I've matured alongside for decades now, is just how fascinating and divergent its evolution seems in the rear view mirror. How different nations and scenes contributed to parallel growth, structurally and lyrically. How particular releases launched a thousand ships like the fabled Helen of Troy, while others could not inspire disembarkation from even the scantest of flotilla. Funny then, that even among all of these coordinated fronts of competitive and emulous transformation, Swiss godfathers Celtic Frost stands as more or less an anomaly, an anthropological crossroads between the cultures of thrash metal, doom, hardcore punk, and the black and death metal scenes which had yet to fully embody their own identities.

It would be hard to take an accurate count of how many recordings have been directly inspired by Morbid Tales, because we're at a stage now where even its own aesthetic offspring are now at legendary status. Darkthrone is the perfect example. Both their death metal debut Soulside Journey and seminal black metal mutation Ablaze in the Norther Sky were openly, enormously inspired by Tom G. Warrior and crew, in atmosphere, attitude AND actualized riff structure; and I could name hundreds of shameless knockoffs of that enduring Norse outfit. Granted, Celtic Frost (and its prior incarnation Hellhammer) were not themselves without some precedent. Punk and hardcore music had by this point arrived and spawned a number of aggressive legends of their own (Discharge's Hear Nothing See Nothing Say Nothing among them), while a not insignificant fraction of this band's relentlessness and filth might be attributed to UK demons Venom and Motörhead; lyrically the former and musically the pair. Tendrils of descent from the crushing pathos of 70s Sabbath are undeniable.

Even inclusive of these considerations, though, Morbid Tails is a distinct landmark on a trail of carnage that stems from the dawn of musical extremity to the ongoing struggle for attaining that next 'level' of aggression. By comparison to faster, more lethal contemporaries of the period like Bathory's self-titled debut, Slayer's Show No Mercy or Destruction's Sentence of Death, the material here often lacks finesse or the same knack for riffing complexity. Celtic Frost had cleaned itself up from Hellhammer, and the production values are noticeably more accessible and professional than the Apocalyptic Raids EP from the same year. That's not necessarily a positive, and I might personally prefer the earlier archetype to their first two releases under the new identity, but it makes sense for a band whose intent was growth alongside the emergent and diversified European underground of extreme metal. These days it's a badge of honor in certain scenes to produce the most amateur, afflicted and unwashed material possible, but by the mid 80s, that practice generally manifest as a symptom of having little to no budget.

However, fret not, heralds of grime, because Morbid Tales still retains the ruddy riffing texture and dynamic sensibility of its predecessors. Blazing, punk guitar passages are interspersed with slower palm muted hardcore/thrash sequences, the latter just as worthy of the primordial mosh pits as what the Stormtroopers of Death would soon start to build overseas. Of the five metal tracks on the EP (excluding "Danse Macabre"), there is a fairly even distribution of fast and slow material. "Into the Crypts of Rays", "Visions of Mortality" and "Nocturnal Fear" all feature rapt excursions into velocity, while "Procreation (Of the Wicked)" and "Return to the Eve" adhere to a plodding, crushing consistency which feels incredibly heavy despite the clarity and polish of the guitar tone. Martin Ain's low end and Stephen Priestly's drumming might not seem extravagant, but they add to the bruised ugliness of the music, in particular the syrup-thick bass which often competes with the guitar for attention, even if the notation runs a similar course.

I would like to spend some time discussing the signature components and techniques that these Swiss legends brought to the table. First and foremost, the corpulent and molten 'grooves' bear some mentioning. A strong example would be the opening for "Procreation (of the Wicked)", with its slosh of chords against strong palm muted chugging that is pretty much the default for how thousands of bands in various genres build a riff even today. Prior to this, I think only Sabbath could crush so hard ("Symptoms of the Universe", etc). But Celtic Frost also evolved a rare characteristic of opening and closing off certain measures with a simple, bended note that oozed torment while giving a false sense of 'incompletion' to the overall riff, a technique that progeny like Darkthrone would recycle for decades. They also stuck to a lot of very basic ascending and descending patterns or chords that helped solidify the grooves without scattering themselves over the fret board, like the incredible mosh riff in the lead-bridge of "Return to the Eve".

Most importantly, though, are the vocals of Tom G. Warrior, which sound like a man choking on crud while clearing his lungs, or some constipated, drunken drifter emerging from a bar in Zurich to take a squat in a dank alley of refuse. With the right amount of echo or reverb here, his bark sounds incredibly oblique, evil and memorable, and the guy's 'hoos' and 'has' and 'ooos' are just legendary, a clear remnant of his showmanlike, hard rock forebears. Surely there's a bit of Cronos and Lemmy in the 'spirit' of his delivery, but his thick accent ensures a unique quality that, to its day, I know I hadn't experienced. The lyrics are also pretty fucking impressive, paeans to the contrasted knight/serial killer Gilles de Rais ("Into the Crypts of Rays"), ritual magic ("Visions of Mortality"), the succession of original sin from the Old Testament ("Procreation of the Wicked"), the dreamstate ("Return to the Eve"), and even Lovecraft's Mythos ("Nocturnal Fear"). A pretty eclectic array of dark subjects delivered through thoughtful, image-thick prose that was well ahead of many of the band's metal contemporaries (internationally).

Despite all of its myriad qualities, and the many distinctions I've described herein, I will admit that Morbid Tales is not quite deserving of a bust upon the pedestal of perfection that others might claim. Its primal transgressions I take no issue with: not the simplicity of the songwriting structures, nor the predictable flow of the riffing. But, for example, I don't like the lead guitars, which are fleeting and messy but lack the energetic, unhinged pizzazz that bands like Slayer and Pestilence whipped up through the 80s. While consistent with one another, and the mood of both the iconic cover art and lyrical matter, I've never found all of the rhythm guitars to be that exciting ("Nocturnal Fear" and "Into the Crypts of Rays" have a handful I could do without). And then there are the experimental flourishes, not as eclectic and variegated as those later manifest to their sophomore album Into the Pandemonium, but not very interesting either. I like the wall of tortured howls that inaugurates "Into the Crypts...", but the 4 minute ambient ritual "Danse Macabre" sacrifices a little catchiness for its creepiness.

Screams, whispers, a piano here, a violin shred there, a morbid mantra. Acceptable for a Halloween evening, since it sounds like it might hail from one of those holiday CDs you buy at the grocery store; or as background noise for some obscure, Gothic seduction, but not something I would expressly seek out for its own allure... Fortunately, none of these minor mars can heavily compromise the surface area of the EP, and its importance as a cornerstone for the incessant thrash, death, doom and black metal lineage of the 90s and beyond still stands as it approaches its third decade of existence. It's not the peak of this band's repertoire (wait a year), nor a Lord of the Rings for extreme metal. I'd liken it instead to Robert Howard's original Conan stories: elegant but barbaric, crude but descriptive. But is the one really all that less influential than the other in the end? One final note: I was originally exposed to this and its successor EP (Emperor's Return) separately, so I'll review them as such. Today's crowd has the convenience of acquiring them on a single disc, which in no way decreases their individual worth, and makes for a rather consistent full length experience.