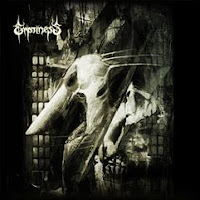 Guilty to Exist had already proven an adequate foundation for this Belgian experimental death metal squad's immense and immersive permutations on the genre, but what it lacked was a truly distinct riffing ability, the means to draw the listener back beyond its elemental, atmospheric outreach. Oblivion addresses these issues and more, with an incredibly rich production that was easily one of the best of 2007, in death or any other metal, and a slew of full bodied guitar work that more than apologizes from the shortcomings of its elder sibling. But behind this, Emptiness remain loyal to their grim, engrossing aesthetic, only tightening the duration and number of tracks they will require to cave in the listener's cranium while having he/she drooling for more.

No time is spared in parading the three years of evolution this band has undergone; "Truth of Trinity" comes out with all cylinders firing off into the void, a brief wash of noise and samples exploding into a well of complex riffs that constantly lay scourge to the mind, produced with as much discord as a technical black metal record, a mix of the band's guttural and higher pitched rasping vocals, and a tendency to continue quickening until the deeper, thrashing segments of the track that are bathed in pale, clinical lighting. "Summon" goes beyond even this, with one of the most superb arrangements on the entire record, an unforgettable stream of melodic wildfire and intense bass playing that stands out well on its own below the descending dementia of the guitars during the jazzy, atmospheric break at 1:00. This is followed by a great, twisting mute riff before 1:30 which dominates its own lead accompaniment, and the tracks wailing climax imprints deep into the memory.

Merely half a second later, the frenzy of "Feeding Force" continues the compulsive brilliance, a roiling mesh of brilliant grind/thrash, deep battering grooves and sporadic bursts of arching melody that once again pass unto legend. Essentially, you are given no chance to rest your bones before the next ass kicking, the rising hostility of "Crushing Ignorance" which completely rocks your kneecaps off again, sprawling you upon the asylum floor. "Forgotten" offers a glint of melodic despair, once again hinting at black metal through its morose hysterics, later adapting a gliding, pensive death metal structure which feels like parasailing across a dense, black sun. Also of note would be the chaotic crusher "Beyond the Rites", the thrash and bounce of "Guilty to Exist" (named for the debut album), and the sleek, memorable grooves that inaugurate "Exhausted Forms". "Slave" and "L.E.A.D." are likewise worth hearing, but they are the least of the band's compositions here, so it's just as well that they arrive so late in the duration.

Oblivion sees Emptiness reaching their true potential, and it's easily one of the best Belgian albums of its class. It may lack an engrossing industrial sequence as the one which closed the debut (though there are a pair of title track segues that fit this bill), and yet it compensates with so much good riffing that you'll very quickly lose count. Dark, concise, and compelling, there really are not many other albums out there like it, and it's set up some huge expectations for anything the band could possibly produce in the future. My initial reaction to this album was one of disturbed enticement, but through only a few shorts years it has grown into a tense rapture. Well worth whatever you would need to spend on it.