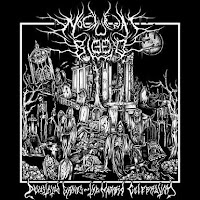 I'm going to clear the cemetery air here up front here and admit that my appreciation for Devastated Graves: The Morbid Celebration comes at the cost of my usual criteria. Not because it's bad, because it's not even remotely bad, but for the fact it exists within a realm where innovative riffing is just a fable, as if sole survivor Ghastly Apparition (formerly Nocturnal Ghoul, Spirit of Darkness) mocks such a prospect. Since I'm normally a huge fan of guitars, and the interesting things men and women do with them, I should sneer at this and the damned burial mound it shambled out of. Strangely enough, that turns out not to be the case at all, and as with the Invocation of Spirits EP and Imperial Impurity split (with Sanguis Imperem) releases from earlier in the year, I found this debut pretty satisfying for all the right and wrong reasons, as if the sheer, primitive atmosphere alone stirs up the dust motes from the tomb of death metal's still festering corpse and the headstone is removed to reveal a shit eating, worm hollowed grin.

Nocturnal Blood is a project exuding some of the sickest death metal in our nation, but it's quite secular from the horde of ravenous technical beasts we generally associate with the Californian scene. You're not going to find sweeping, myriad tempo shifts, acrobatic drumming and frenzied guitar work. These are the sorts of riffs envisioned back in the heyday of the genre, when it was just enough to summon up an extreme guitar tone, a few crude oil patterned riffs, and guttural vocals that offer nothing but the stale breath of the underworld. The production is kept blissfully raw, at demo level or below. True, this approach might frighten away the legions of masturbatory wank-officers who have no interest in anything besides nerdy precision and algebraic theory accompanied by monotonous, percussive gutturals, but it's not as if Ghastly leaves this a barren, dull plot of grave dirt. The churning guitars bellow out against both blasted and slower rock beats as if they were the very process of natural putrescence, the vocals soar and echo like desperate, dying ghouls bleeding their last into the uncaring, frosted night.

The album does initially carry a sense that if you've heard one track, you've heard them all, especially if you've already exposed yourself to Nocturnal Blood's previous works. But when you listen in at a deeper level, beyond the brightness of evolutionary expectations, below the critical din of novelty, then the sodden, ruptured earth begins to suck at your heels, and the decomposition process begins. "Devastated Graves" offers only a sliver of tonal black ambiance before the guitars erupt, the throat howls, and that's about the only deviation from the carnage (aside from another brief intro to "Chaos Blood" and the faint far slope of closer "Triumph of Impurity"). Tracks like "Death Calls", "Ghouls Wrath" and the doom driven "Ritual Lust" are disgusting, godless wads of bitter, bile drenched flesh, choking in their own trails of horrific viscera. The leads serve as nothing more than wailing specters of sporadic anguish, bats and harpies escaping the clutch of the sepulcher before the gates are shut forever, and the drumming throughout the album is nonchalant, primal, and live as if you were listening to it through a rehearsal room wall.

Stylistically, the overall atmosphere seems to thrust into some obscure dimension between the carnal abandon of old Incantation and Autopsy, and the brackish black bog of Hellhammer and the first few Bathory records. The churning guitar tone is most reminiscent of ancient Swedish acts, like some simpleton cousin to Entombed's Left Hand Path. I would have enjoyed a little more bass in the mix, and perhaps some additional segues into morbid ambiance, which would have created an even stiffer sense of necrosis (even some numbing synthesizers might have worked miracles), but I can see how these things might be considered diversions from the very source of suffering. The seven tracks here offer little more than a decrepit mirror to the primitive past, but a mirror through which the tangible taint of the old school can be summoned into our present and future, like a black cloud of sulfur settling upon the magnet of your flesh, stinking the remainder of your days. Seeing that these sort of regressions are increasing in popularity of late, I really hope Nocturnal Blood will find its audience, whether that consists of the elderly purist or the slovenly newcomer who 'gets it'.