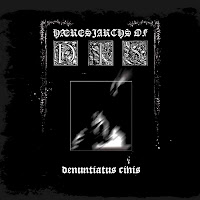 It's both appalling and fascinating just how much the art of the 'solo' black metal artist has progressed through the years, beginning with some of the crudest, most amateur recordings known to mankind in the genre's birth; then progressing into something like Denuntiatus Cinis. USBM has always been strong in this area, fielding such loved (or hated) personalities as Wrest of Leviathan and Malefic of Xasthur, and through the spite-filled, toxic ministrations of the Hæresiarchs of Dis, we should now add Cernunnos to this small but expanding club, because the Californian demagogue of darkness has struck aural terror in its purest vein through this sophomore, eviscerating its 2008 predecessor Overture in the first few tracks alone.

Now, before I begin to salivate opaque ichor from my worship glands over the albums central, diabolic diatribes of pure evil, I first must note that there are really two albums going on here. One is a strain of no nonsense, well composed black metal with vicious vocals that sound like a feline envoy from the abyss using a crucifix as a scratching post until it bleeds, over interesting if largely standard black metal rhythms that will occasionally throw the listener for a loop, oozing clean male choirs that give the Norsest northlanders like Borknagar a run for their krone, and sparse but volatile undertones of progression. Most of these compositions dwell about the 7-9 minute range in length, and are very often alternated with the other album: a series of interludes and instrumentals that explore vast and wide territories of sound. The problem is, which of these two disparate but strangely unified entities is the superior Hæresiarch? I find it almost impossible to decide...

The instrumentals and segues are certainly the more mystical, whisking the listener's spirit away to realms of sodden obscurity, of rapt antiquity and supernatural miasma. "Entry" creates a vacuous, 2 minute roiling tone poem, like blunt leviathans keening their alien tongues through some cosmic wailing wall, or the flood of spiritual ambiance through an abandoned asylum or torture chamber. "The Respite"'s acoustic guitars reek of abandonment, of dust motes filtered through forsaken chambers, of claustrophobia in bloom. Then you're thrown for a total curve ball with the traditional but demented vocal folk of "Bemoan the Fallen", or the gorgeous if morose vocal symphony mourning of "Nine Days They Fell", the brooding horror narrative of "Intent Concupiscence", black distorted guitar sheen of "Intent the Succedaneum", or the sinking finale "Exeunt". For fuck's sake, the language this man uses in naming his bleak conjurations!

Woven through this aural adventure are several hymns of a more precarious, traditional nature, that is the actual black metal content, beginning at the searing "Intent the Prome" with its bewildering melodic collisions, deep and doomed clean vocals counteracted with snarling menace, and bizarre transgressions like the jangling mathematical bursts around 1:30 in. "Intent Canticle" creates the same surge of night sky vision that you once worshiped in Emperor, ridden with termite holes of strange nuance and discordance; "Intent the Augury" explodes from its rather humble asylum origins into a vortex of malaise, and "Median Existere" bristles with the black spikes of entropy as it navigates turbulent, blasted prose. But perhaps the best of its more aggressive offerings are located deeper towards the rear of this ritual, namely the wild and sporadic "Ad Baculum" and soul throttling rape rhythm of "Intent Postremo Enclosure Orsorum".

In the end, it doesn't really matter which of these paths you prefer to wander, because you've won either way, with damn near 70 minutes of hideous evil that provides one the very best USBM release I've heard this year (alongside the latest from I Shalt Become). Denuntiatus Cinis is a painful place with no respite, no soft surface upon which to rest your worn heels, and even its most tranquil moments exude obscene horror. Before long, you come to the realize that it's either Cernunnos or the rest of us. No balance, no order and no civilization can bear fruit in the shadow of such an entity, and he must be burned alive, this philandering, godless shell of man!