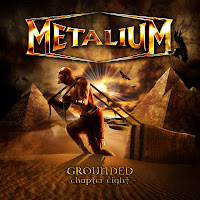 Metalium is a pretty consistent band, especially with the amazing, crystalline voice of Henning Basse at the helm. Most of their albums have had a few good songs and then some filler pieces, and their 8th full-length Grounded tends to follow this pattern. There are some standout tracks that fans will enjoy, but sadly nothing as epic or legendary as "Steel Avenger" (from their 2nd album).

The opening track "Heavy Metal" begins with the lyrics 'We are heavy metal/if you don't like it, fuck you!'. This is pretty dumb, but should immediately bring the entire Deathklok audience on board for this album, right? Aside from the lyrics, the song is actually a pretty fun speed metal number with some glistening melodic riffs, and Basse sounds as sharp as ever. "Light of Day" starts with some dense distorted bass groove, building into a squealing, brickhouse hard rocker. "Pharos Slavery" is a nice, historic power metal song about the Egyptian slaves building the pyramids and serving the whims of their pharaohs (i.e. the cover art of the album). Other quality numbers are the melodic rocker "Crossroad Overload", the Priest-like "Falling into Darkness" where Basse lets the Siren out of his soul, and the bluesy arena rocker "Borrowed Time".

Grounded sounds fantastic, but doesn't every Metalium record? The songwriting here is as strong or stronger than the past 4-5 albums, even if every song doesn't carry the same excitement or equal some of the material from earlier in their career. There seems to be a drought for truly memorable power metal this year, but if you've grown tired of spinning the new Grave Digger or U.D.O. albums then this would be a good fit.