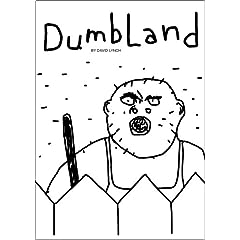 I would like to preface this review by saying that I greatly enjoyed Eraserhead, but have not seen any other David Lynch movies (aside from Dune, but that's not an original production). So, upon hearing that my friend had a copy of an animated feature by him, I was certainly intrigued.

Seeing the cover of the dvd, I knew it would either be absolute shit or...something else, but I was banking on absolute shit combined with hope. How did it turn out?

I have never felt that anything was so irredeemably stupid. Random flash animations are generally entertaining to some simple degree. Really, it's kind of a testament to Lynch that he could make something this egregious.

Yes, there is of course a point to it all and a statement to be had. Dumbland is Lynch's take on contemporary adult cartoons with a focus on a stereotypical Yankee family. It is immediately apparent that he is trying to show how banal this type of life is, while at the same time mocking shows such as The Simpsons and their humour. The problem? There is nothing clever about it, and it's torture to watch. I wasn't angry at it or anything - all I could form in my head was an exasperated why? Why did you make this, and why did you put it on a dvd for people to buy?

I could go further into the failure of Dumbland's thematics, but it would be a complete waste of time. There is no way to convey how stupid this is. I can say, however, that all interest I had in his other movies is now gone.