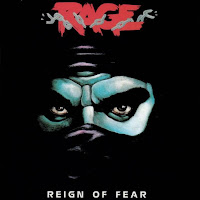 Although the full-length Avenger record album, Prayers of Steel, was enjoyable, it wasn't until Peavy Wagner and company had undergone the name change to Rage that they strung together one of my favorite metal recording streaks of the 80s (spoiler alert!); one that I listened to with nearly the same reverence as the Golden Eras of Metallica, King Diamond, Coroner, Voivod and other favorites of that period. There are a number of camps within this band's fandom, some prioritizing the era that they were first exposed to the Germans' music, others attracted to the particular studio aesthetics of their more polished, measured mid-period of the 90s, their handful of conceptual 'rock opera' style efforts, or even the most modern sounding of their output. While I enjoy a few albums or songs from all of these epochs, none has come even close to this early run of Noise Records classics, full of shrieking abandon, raw ideas and aggressive, memorable riffing that was a creative fusion of thrash, speed and the budding European power metal sound.

Even as far back as this 'debut', the band was writing rhythm guitars that sounded like nothing else out there...not because they were a massive stylistic departure from the parameters established by genre staples like Judas Priest or Accept, but they were just really imaginative and epic, while retaining an almost workmanlike, steel-mill execution due to the rough yet clear mix of the vocals and instruments. This was a sound which could hang with the heavier edge of the NWOBHM, or some of the emergent thrash and speed metal from both their native Germany and North America. A dark atmosphere is imprinted as soon as you lay eyes upon the blue-tinted cover ninja, and maintained through the structure and savagery of the lyrics and riffing. Since this was the same lineup as on Prayers of Steel, certainly there is some carry-over of those elements from before, but Reign of Fear is just a step beyond, an album I've admired since my first spin as a young teenager, but only come to appreciate even more in the wake of their even more impressive output yet to arrive.

The focal point is the vocal point: Wagner's hoarse, wavering, accented intonation was a treasure at the time. From a lot of his more recent material, it'd be hard to imagine he once had a range like this, but for years the Rage catalog was replete with Halford like screaming that was a great contrast for that blue collar anger in his mid toned barking, and he could use it to great purpose in the song choruses, although this particular album isn't quite where he would flaunt that the most. Cuts like "Hand of Glory" or the opener "Scared to Death" are fine examples of him going off the hinges while still keeping it catchy and slightly under control. That he's also a great bass player is of no small consequence, the faster tracks on this album keep him busy, or the power thumping of a mid-paced fist-raiser like "Raw Energy", where he once again is using those screams to maximum potency.

There's a lot of dynamic range in the track list here, from the outright blazers to the aforementioned arena stompers, to the ambitious if flawed track "The Scaffold" which is 9 minutes long, with acoustics leading up to a slower, melancholic 'epic metal' track that you might almost expect out of a band like Manowar. "Machinery" is pretty much an all out speed/thrash attack, with some infectious fucking riffs. The guitars have just the right level of rusted steel strength, whether splayed out with open chords or exploring the more agile patterns; the leads shift between moody and sporadic, but all sound just awesome seated within their respective riff-sets. The legendary Jörg Michael's drums are powerful, splashy, benefiting highly from the reverb-washed mix. The band was also trying to level itself up with the inclusion of some synthesizers, as in the opening march to "Scared to Death", or the timpani and other percussion visited in that swollen bonus track I mentioned above.

The lyrics can oftentimes come off a bit weird or cheesy, like the sleazy sex anthem "Chaste Flesh", but who am I kidding, the dorky 13 year old virgin me absolutely fucking loved all of this, as it helped his balls drop...and for the most part, it...still does?! Reign of Fear is an album that has aged so well for me...or maybe it's more appropriate to say it hasn't aged at all. While not my favorite in their catalogue, there is just no possibility of me putting together any Rage playlist without including half of the gems on here..."Echoes of Evil", "Suicide"...of the nine core album tracks, there are none that I dislike. "The Scaffold" has its ups and downs but it certainly serves as another testament to their ambition, to try things and see what sticks. Thankfully, so much of it did stick, and it's never been flushed out of these earholes.